This work is part of Public Realm R&D, an umbrella initiative; learn more about it here.

Happy is both a figure and a place. A series of softly shaped and richly colored screens drape down from an open frame to inscribe a more intimate collective space and provide an analog filter to see the city in a different light. In our otherwise bleak social and political context, this architectural installation aspires to carve a small yet more positive urban space: It seeks to offer a warm embrace during the cold winter months.

For the fifth year, Van Alen Institute and the Flatiron/23rd Street Partnership called for proposals for the annual Flatiron Public Plaza Holiday Design Competition. The project aimed to design and build a highly visible temporary landmark at the heart of the Flatiron District to be the centerpiece of the Partnership’s annual holiday programming. 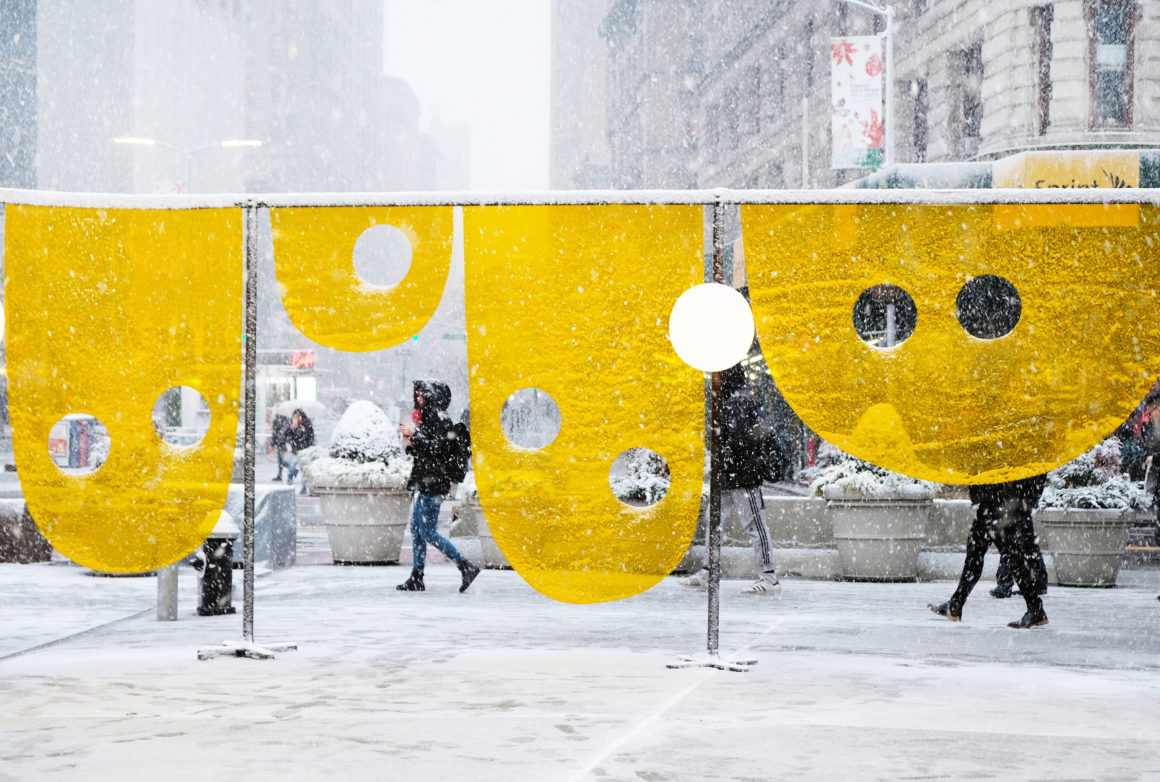 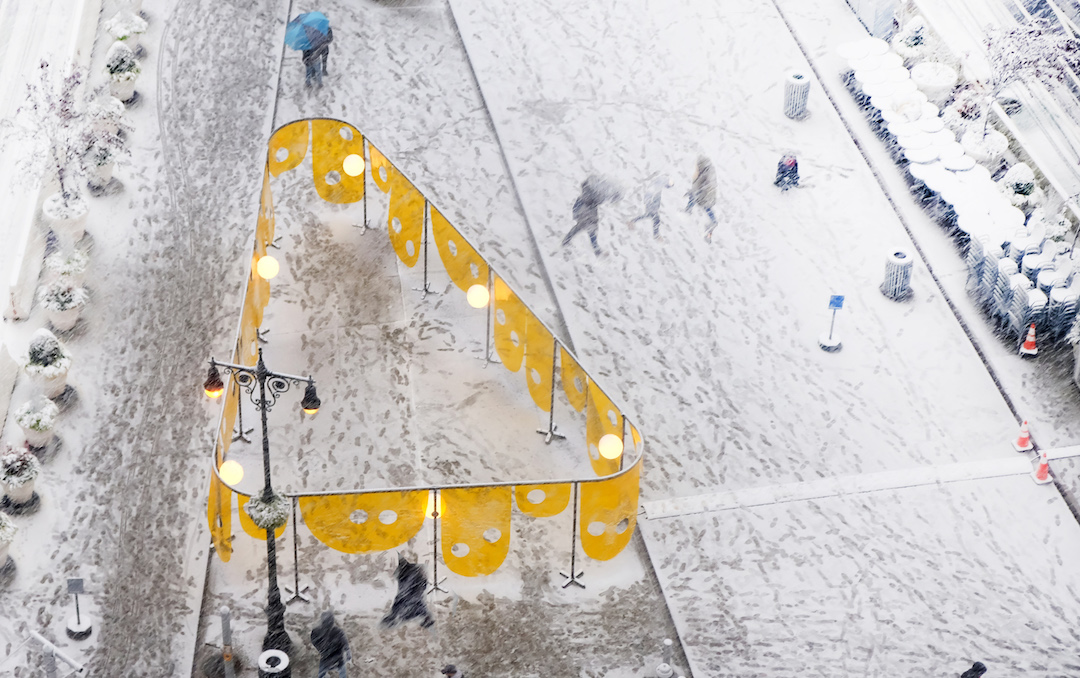 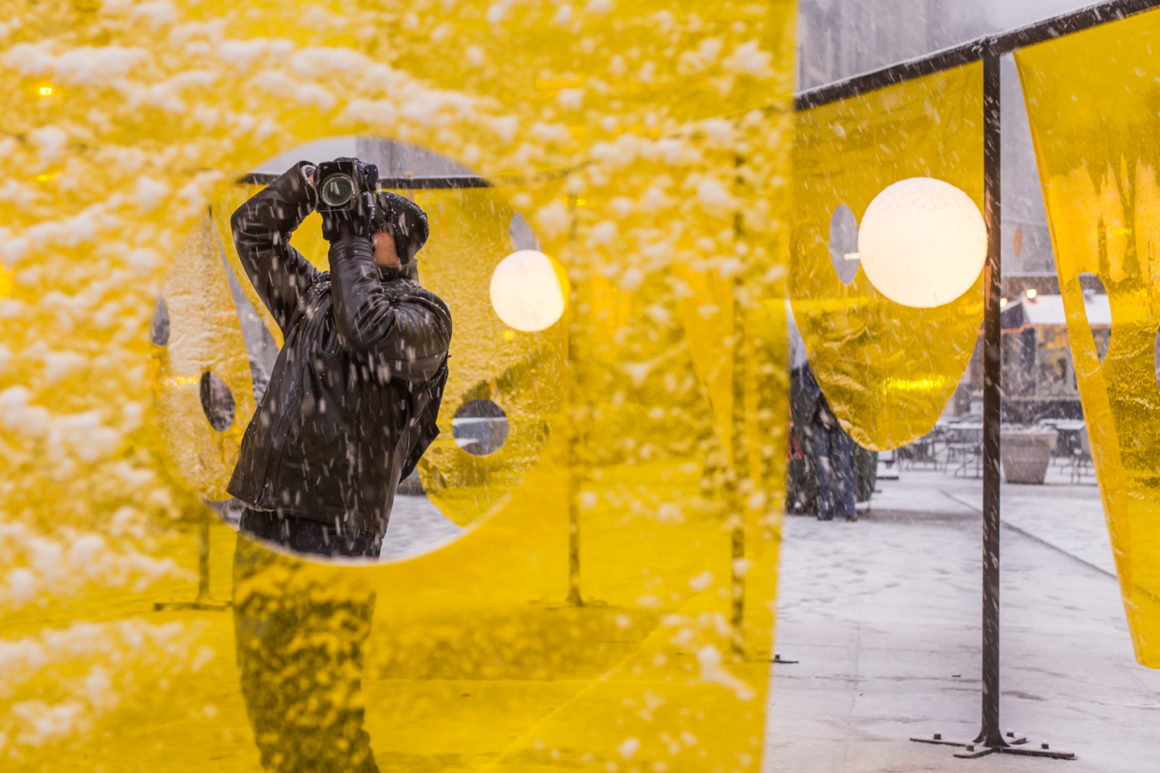 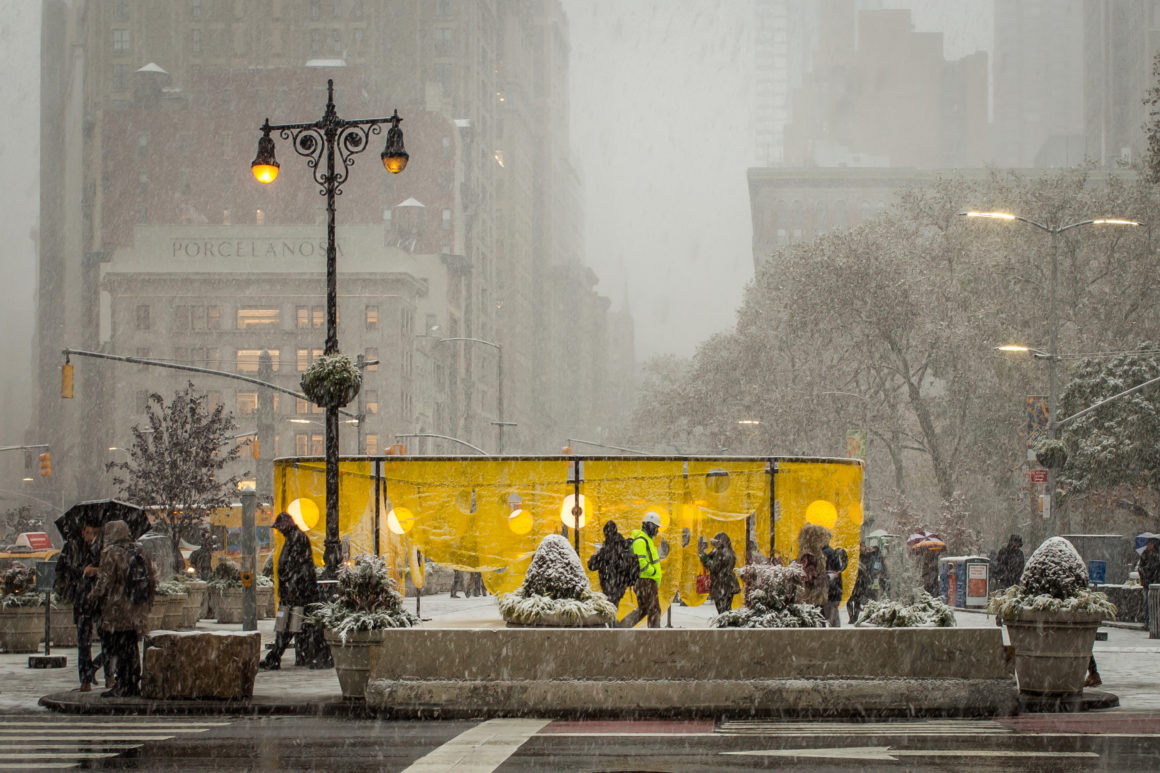 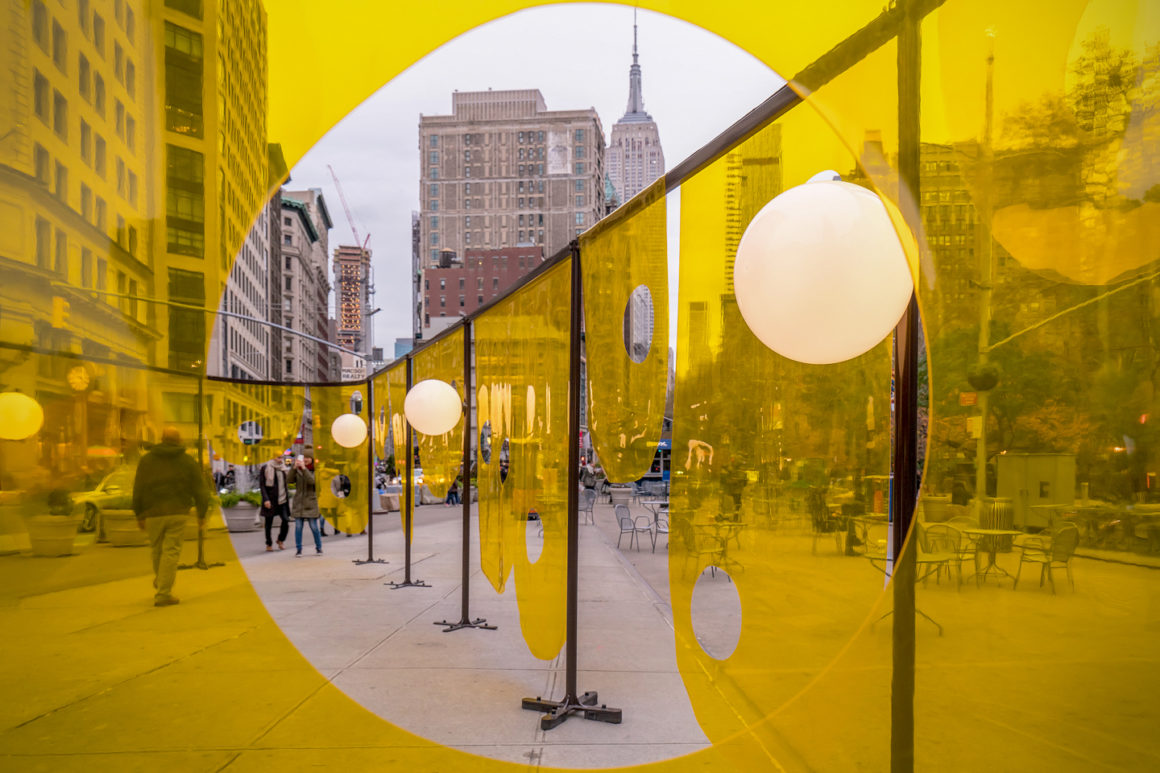 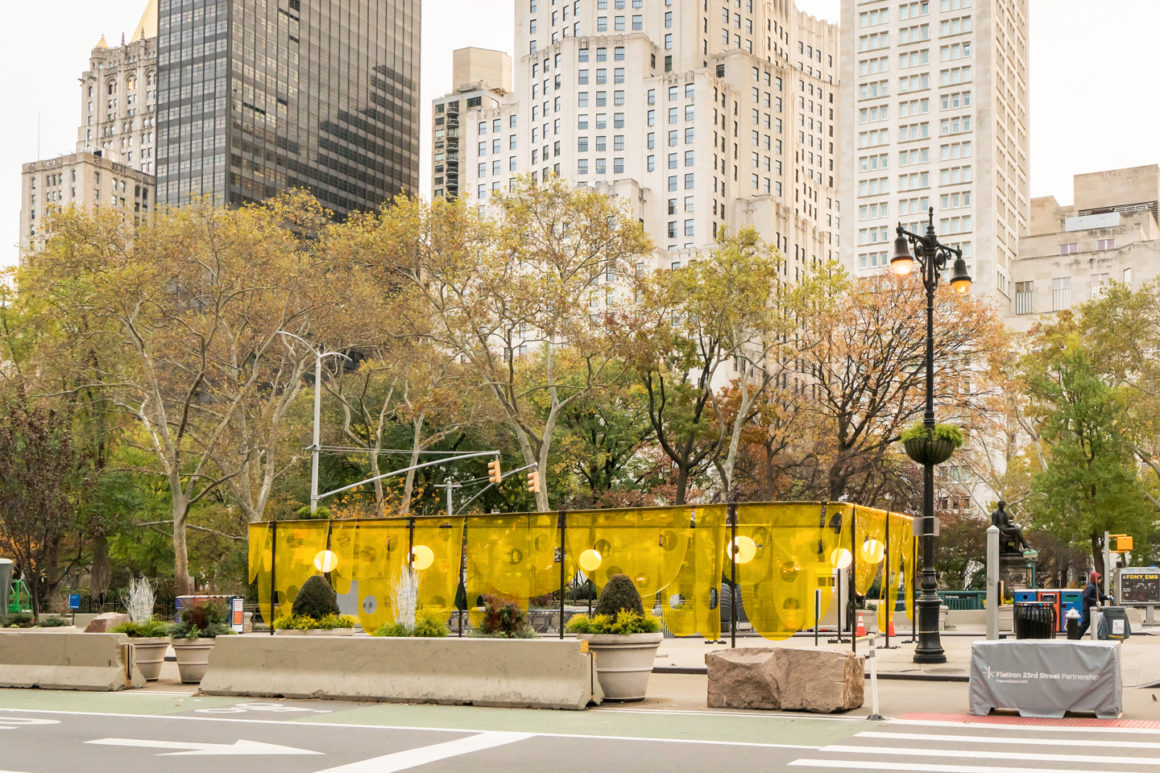 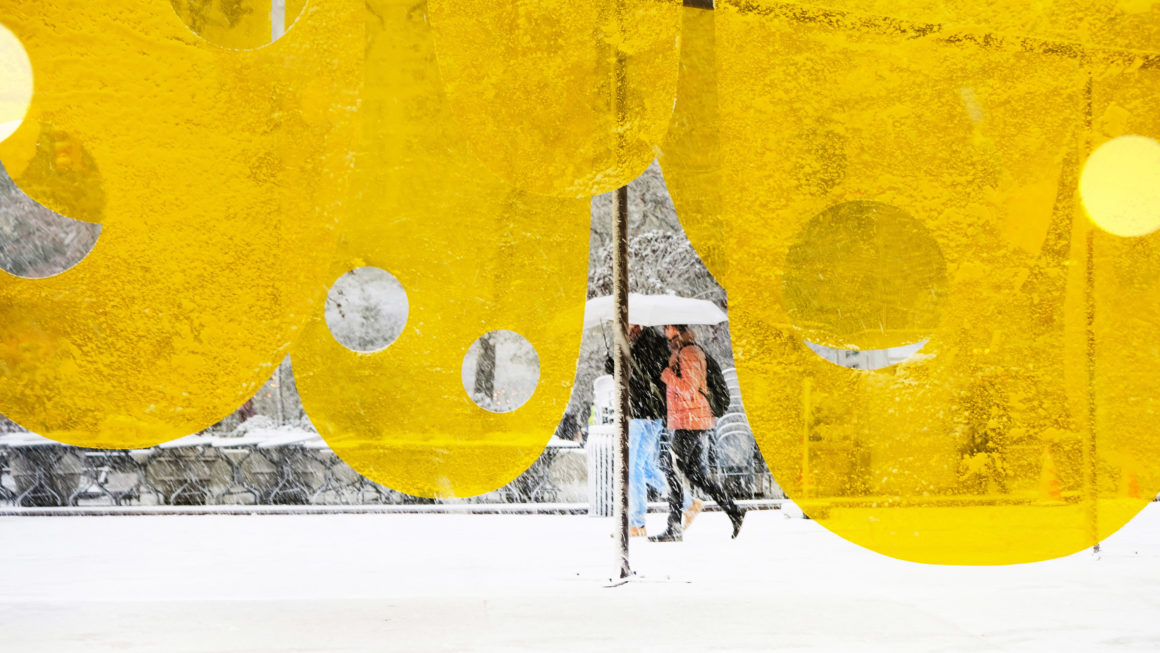 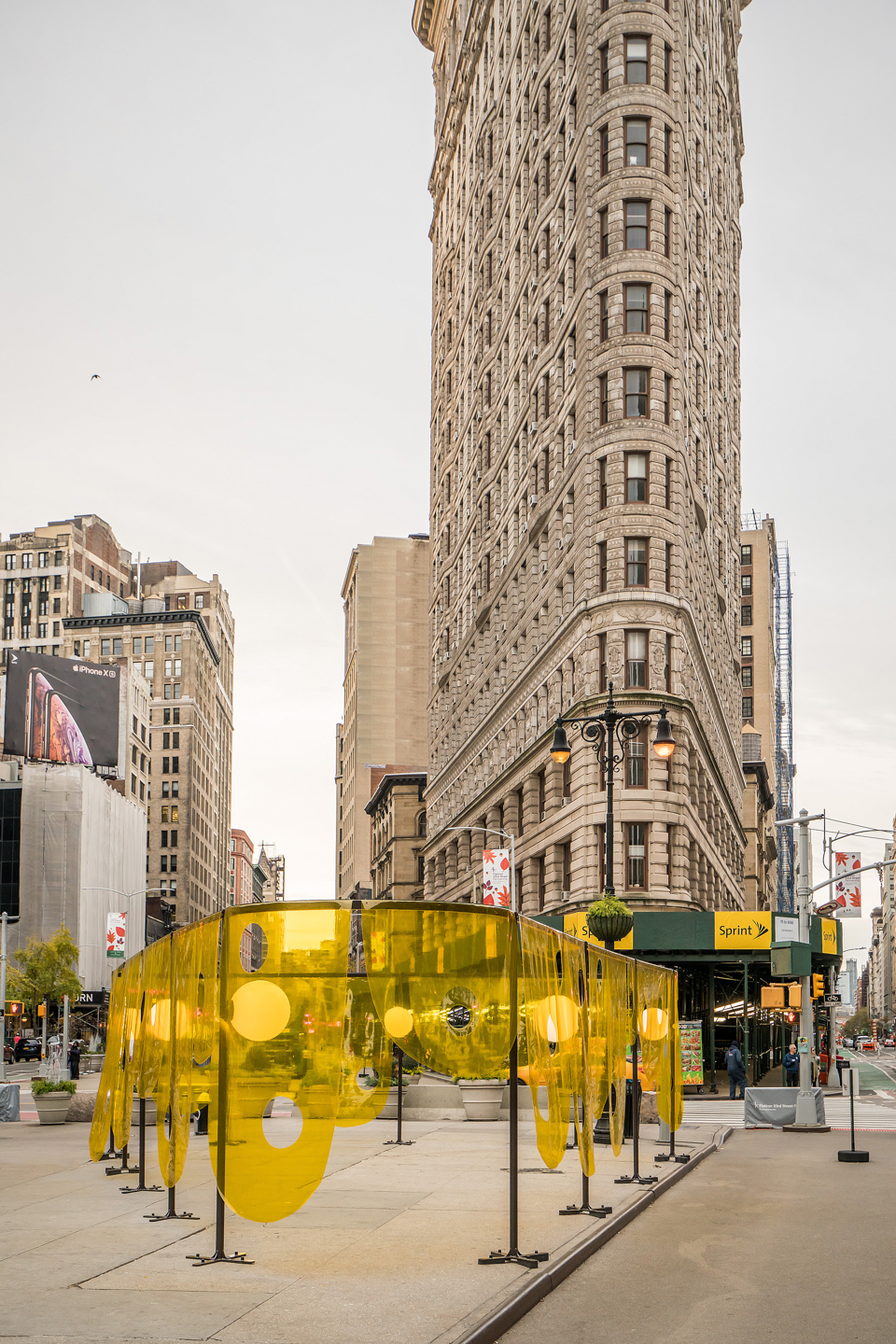 Studio Cadena is an award-winning design and architecture studio interested in engaging contemporary life, the city and its people – in designing new and captivating spaces, places and experiences…

Happy is both a figure and a place. A series of softly shaped and richly colored screens drape down from an open frame to inscribe a more intimate collective space and provide an analog filter to see the city in a different light. In our otherwise bleak social and political context, this architectural installation aspires to carve a small yet more positive urban space: It seeks to offer a warm embrace during the cold winter months.

Softly swaying in the breeze, its overlaps and overlays continuously interplay with light, inviting passersby to bask in its rich saturated glow. It emotes and evokes what we all wish to be.

The Happy installation is a simple device to make you stop, wonder, and most importantly, smile. 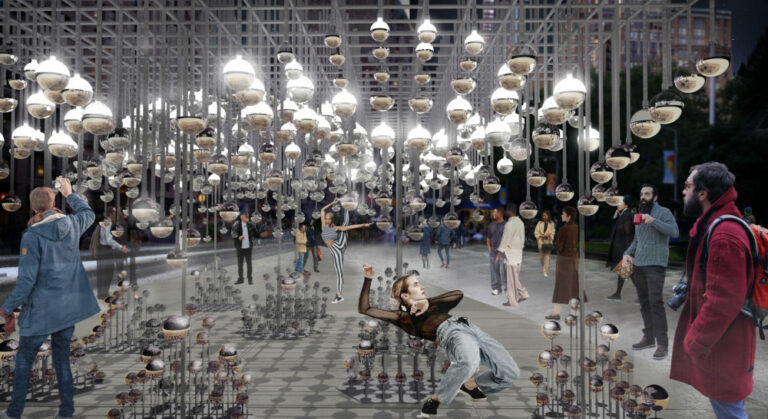 Wolfgang & Hite is a New York City based design and specialty fabrication practice specializing in interior architecture, exhibition design, and art production. We bring together multiple backgrounds in…

POLARIS, like the eponymous North Star, celebrates the center of the city in thousands of reflections, images, transient interactions, and memories. Hundreds of reflective orbs hang in the form of larger mirrors arranged toward views of the Flatiron District. The multiplicity within each spherical mirror represents the myriad perspectives and viewpoints of New York’s inhabitants and visitors, which come together as a glistening whole. Like holiday wishes, the orbs light up at night in programmed sequences. Lights dim and glow, moving through the structure like stars in a winter night sky. POLARIS, like New York City, is a beacon of discovery, entertainment, inspiration, and adventure. 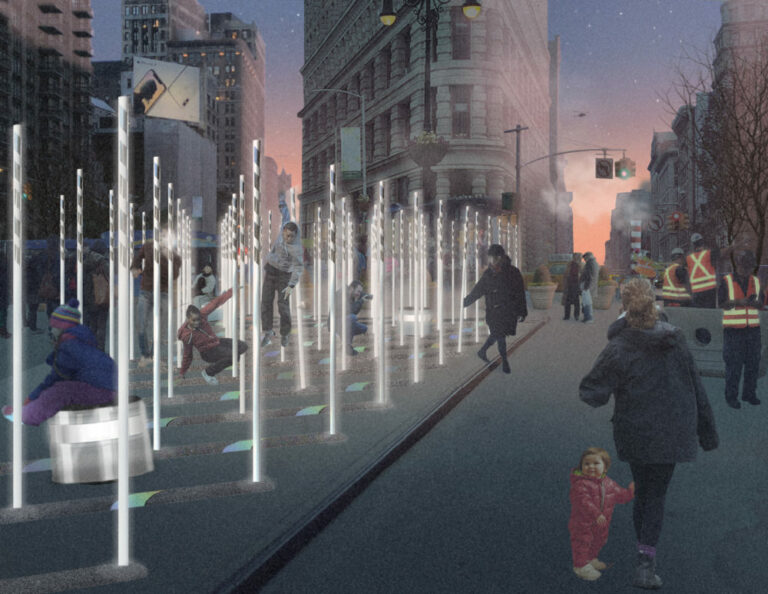 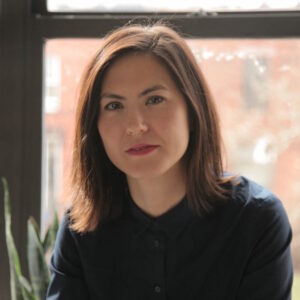 Agency—Agency is an award-winning New York City-based architecture and design studio directed by Tei Carpenter. The practice seeks out an expanded role for architecture by engaging buildings, objects, interiors,…

An array of sixteen rubber diagonals—at 45 degrees to the street grid—supports a field of internally illuminated poles, each standing at seven feet and attached with a flexible anchor to allow for subtle movement. The poles are finished with a retroreflective paint—similar to that used for crosswalks—to produce a glowing, glittering and illuminated experience through the interplay of people, headlights, and phone flashes.

With the crossing of directions between the grid of poles and the array of bases, the project offers a moment for visitors to reorient within the city. The luminous qualities of the poles reflect the significant role that light plays in holiday traditions, uniting many in its reflection. 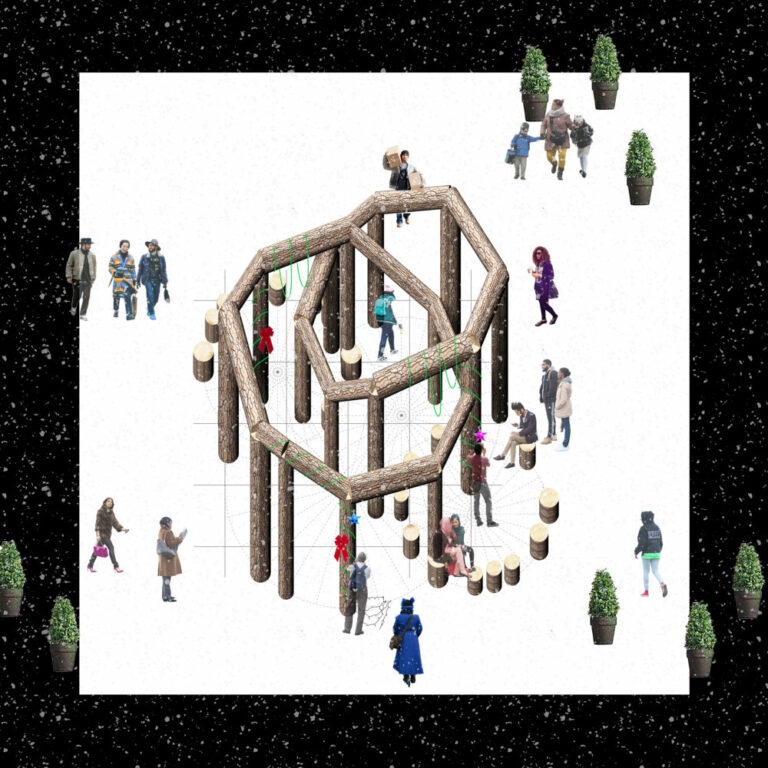 BRANDT : HAFERD is a Harlem-based architecture and design studio. Their body of work includes academic research and a range of built projects – from the domestic to the…

MINGLE : jingle for a holiday folly

Mingle, a folly in Flatiron Plaza, presents a space for New Yorkers to gather and participate in the creation of new rituals. Formed by a modern tree-henge, the series of frames instigates creative interaction by visitors. The architecture relates to the park and its context while playing a game with both radial and orthogonal grids. A structural feat with a haphazard appearance, the massive tree trunks above inspire the imagination and conjure our (pre)histories.

Mingle invites the idiosyncratic and instigates collective buildup to complete the design. The structure is thought of through time. Once installed, the bare “post-and-lintels,” held by internal steel joints and made of large red pine, will begin to transform throughout the holiday calendar. Lights, bows, a piece of cloth, a small offering made from a (Shake Shack) foil wrap will dress and decorate the trunks. Interactions with the piece will help to shape new rituals and outdoor community performances. 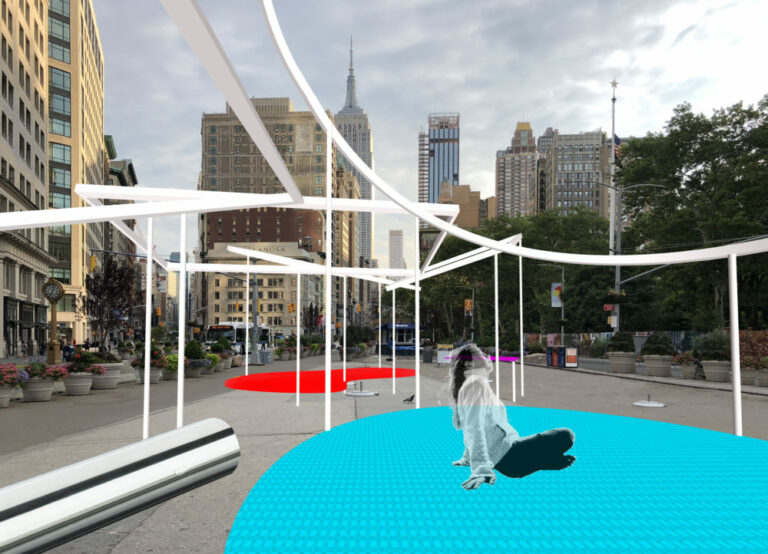 N H D M is a New York-based practice for design and research in architecture and urbanism, founded by its partners Nahyun Hwang and David Eugin Moon. The studio…

Pavilions Pavilion–Flatiron is an inhabitable structure that frames new interactions and relationships. Composed of a group of dynamically arranged and connected small pavilions, the project offers a strong and animated sculptural presence when seen from outside or afar, while providing unique views that celebrate the adjacent landmarks and their surroundings from within.

Inspired by the holiday spirit of generosity and the concept of a simple shelter in the holiday stories of many religious and cultural traditions, the project offers possibilities of sharing within as well as beyond the site. Each pavilion is designed to be distributed and re-used as a framework for new gazebo structures in selected community gardens, achieving an urban-scale presence across the city along with a function at the iconic location. Distributed in the intimate settings of community gardens, their specific geometries engage various environmental and ecological initiatives, becoming infrastructure for new collaborations, knowledge, and friendship. 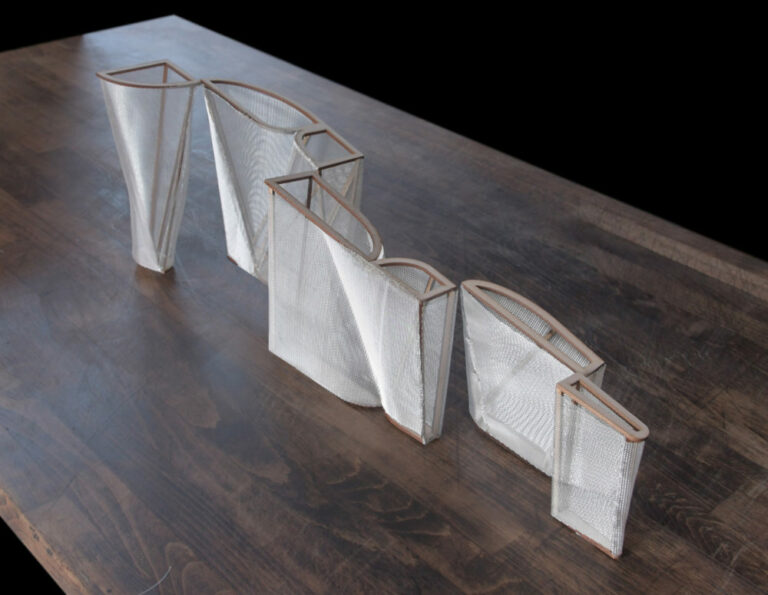 Office III is the architecture and design collective of Sean Canty, Stephanie Lin, and Ryan Golenberg. We are a practice composed of educators and designers based in New York,…

Standing Figures takes inspiration from the well-known oblique intersections of New York streets that produce exceptional building shapes such as the Flatiron wedge. Producing new wedges in both plan and elevation, the subdivided volumes are aligned at their intersections to create a playfully tilting composition, aiming to evoke shared perspectives among the public during the holiday season.

From the tip of the wedge toward the Flatiron Building, the planar outlines of the design are revealed in their entirety as each shape gradually increases in height. From the opposite end looking north, a series of receding voids step down, creating a layering of forced perspective through the central gaps. The installation opens up from oblique angles to create views between figures.

Further animating the design’s optical effects are the volumes’ perforated mesh surfaces, creating festive overlays of color and pattern as the public interacts and circulates through the installation. 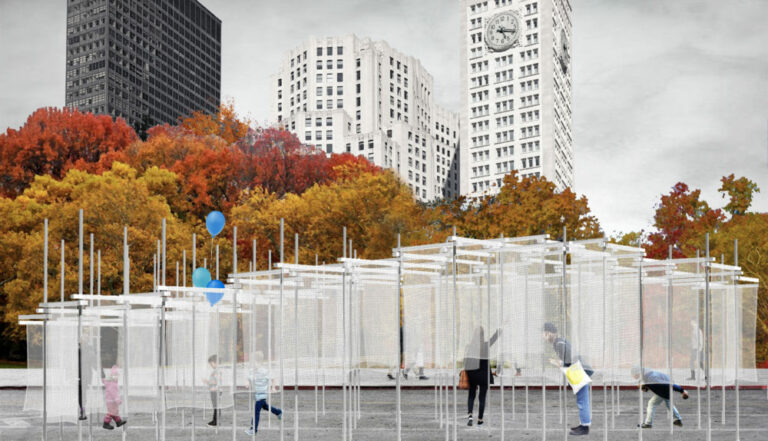 The intersection at Broadway and Fifth Avenue detaches the southwest corner of the otherwise rectangular Madison Square Park, causing a triangular traffic island. For six weeks, The Grove would be an abstract extension of the tree canopy onto this island—a phantom corner of the park.

The Grove is made up of off-the-shelf, unitized, reusable materials: reinforced aluminum posts, 2×4 beams, and exterior-grade theatrical scrim. The columnar structure evokes a grove of birch trees, while overlapping fabric flags mirror the tree canopy of Madison Square Park across the way. Interconnected, these lightweight elements work together to form a stable and strong structural system. Like the intertwined root systems of a tree grove, its sum is greater than its parts.

No attachment into the plaza is needed. No bulky ballast or sandbags are required to resist sliding, uplift, or overturning. The Grove is self-stabilizing, self-supporting, and structurally pure. 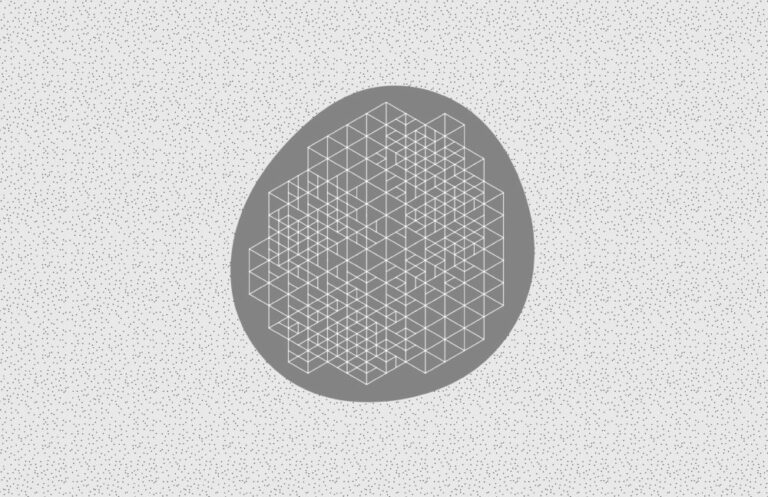 MODU aims to elevate the urban experience, linking people to their communities and neighborhoods to cities. Our idea of a new sustainability reimagines cities and buildings that foster new—…

Diamond Dust evokes the transcendental experience of being in the snow. The installation moves with the wind, dynamically changing its abstract hexagonal patterns. Climate change as a cultural expression—different from day to night—creates a meaningful experience, highlighting both the fragility and resilience of our environment. At night, the hexagonal patterns of light correspond to the day’s climate data, producing new experiences upon each visit to the installation.

The installation experience goes beyond the visual. In collaboration with a music composer, it will include a sound experience that combines wind recordings from the Flatiron Building with the sounds of extinct animals. These sounds, both real and speculative, emphasize the fragility of the environment, amplifying the environmental experience of Diamond Dust.

Nominations for the shortlisted firms were provided by: 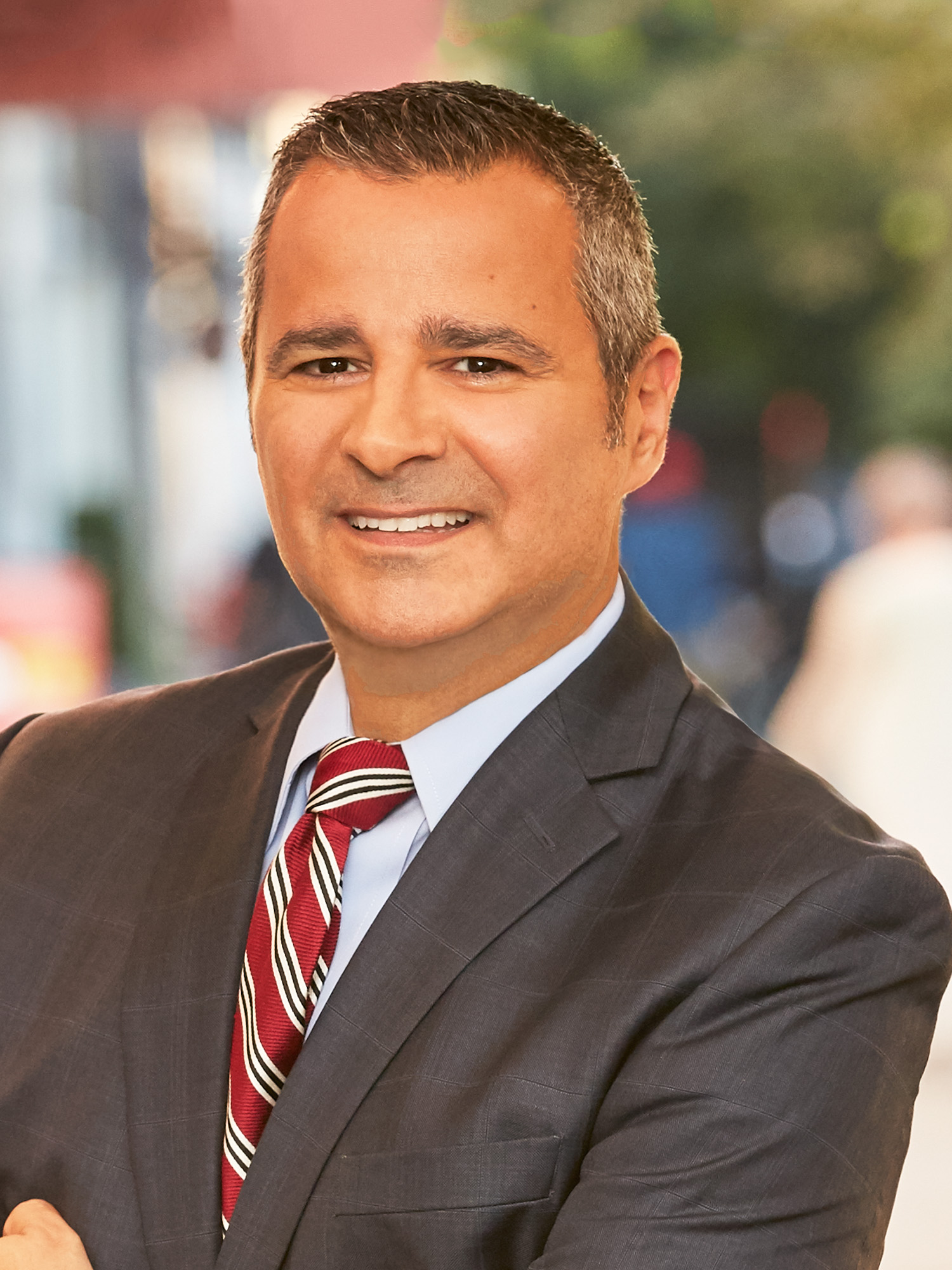 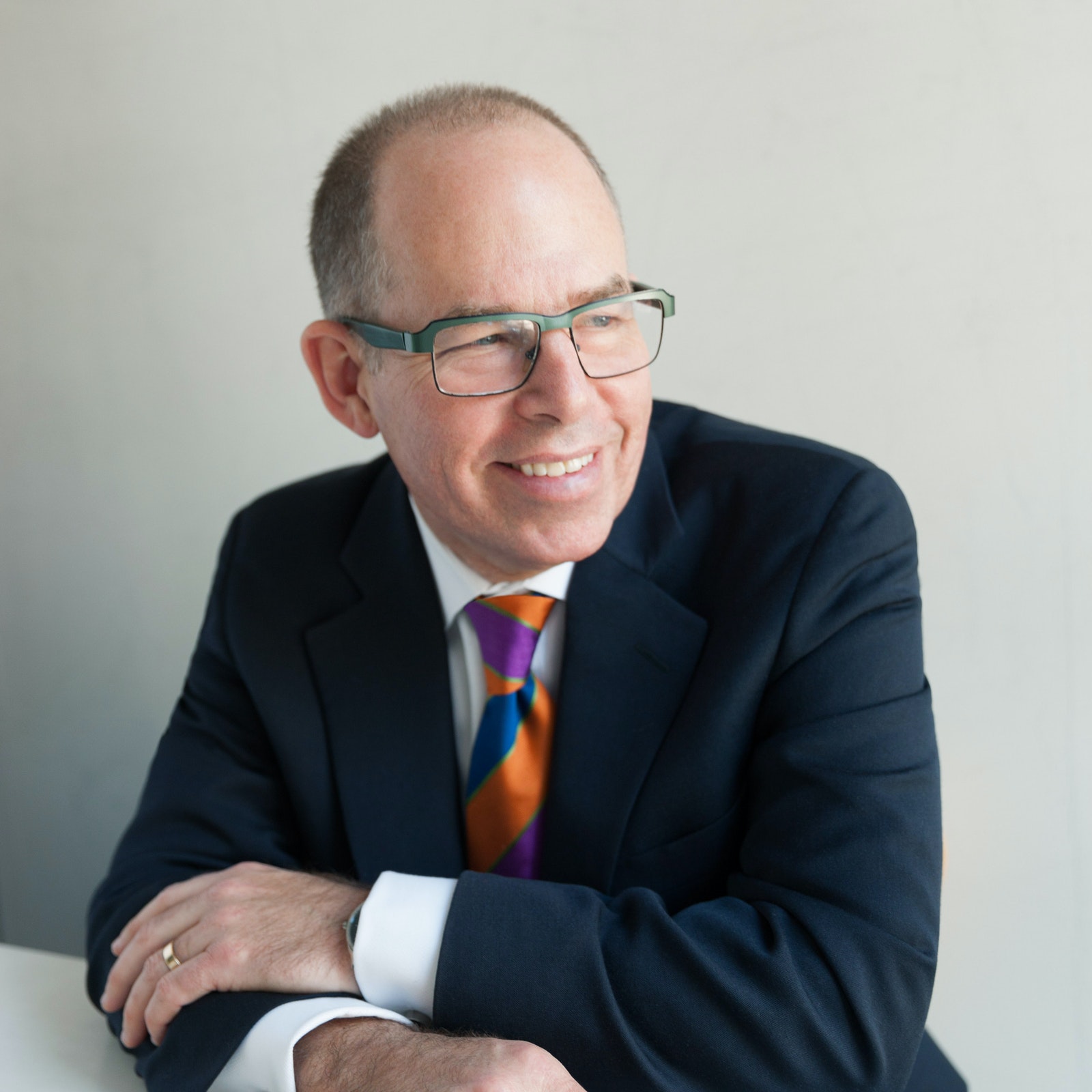 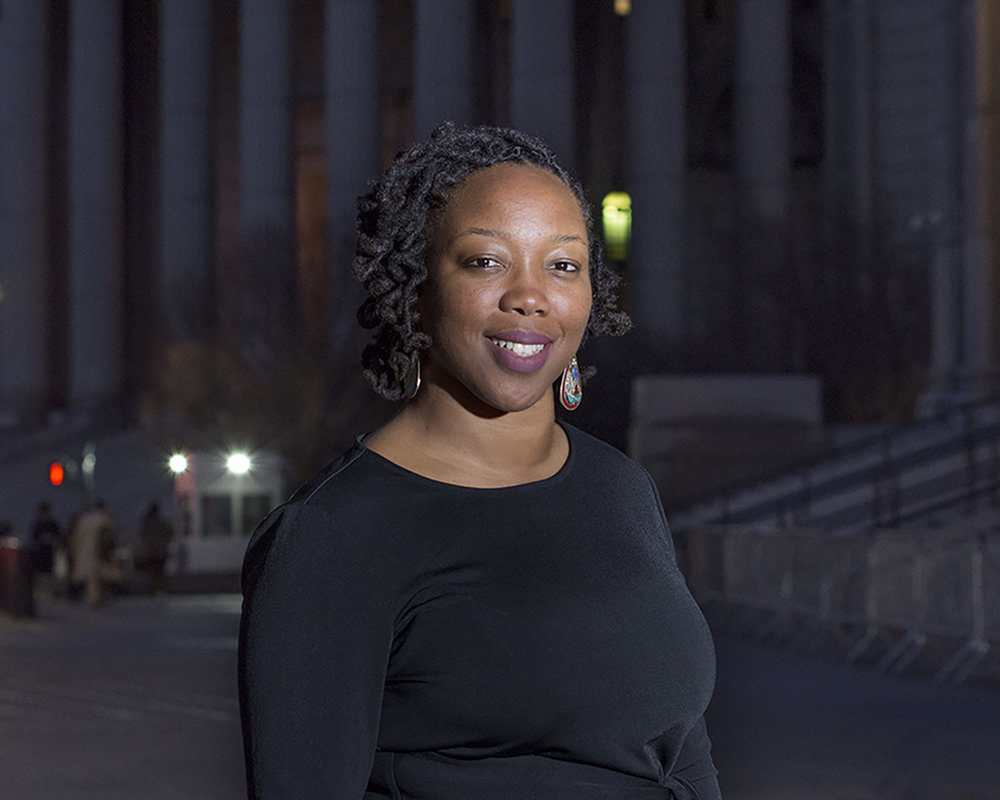 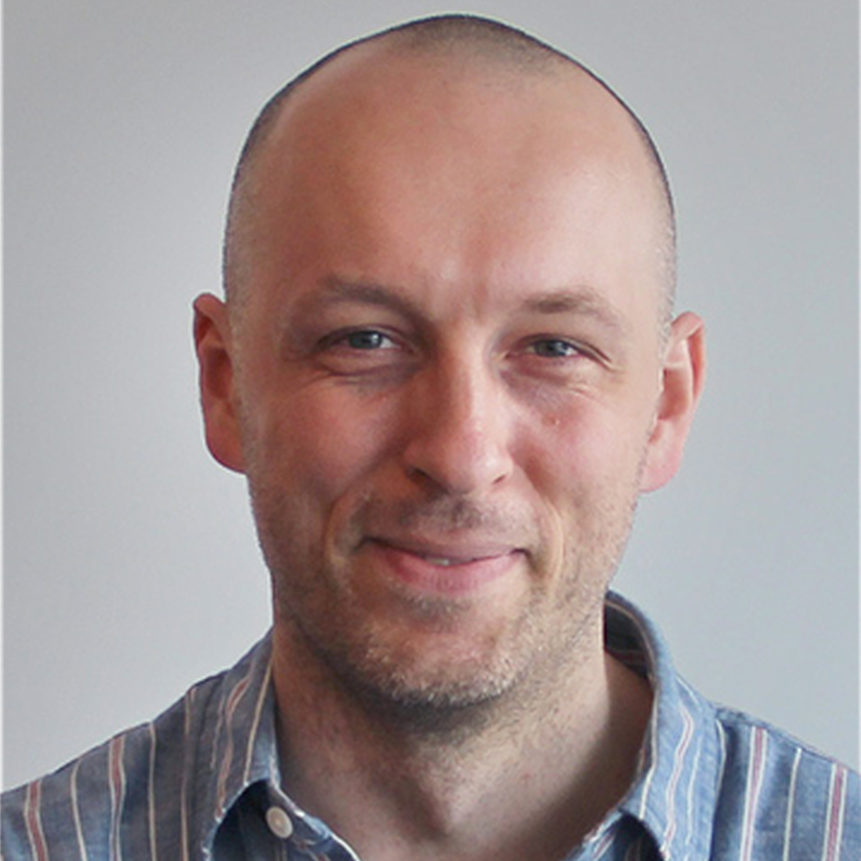