A proposal to transform a viaduct from a single-purpose conduit for cars to a multi-use structure.

For Van Alen Report 20, we invited designers from around the world to share projects at the vanguard of using science-informed practices to design healthier cities. For each featured project, we asked the designers to identify the health impacts intended, and discuss how insights from neuroscience or psychology influenced the project’s design. We also consider how each project might advance both the conversation about evidence-based design, and the greater pursuit of designing healthier cities for all. These profiles have been adapted from the designers’ responses. 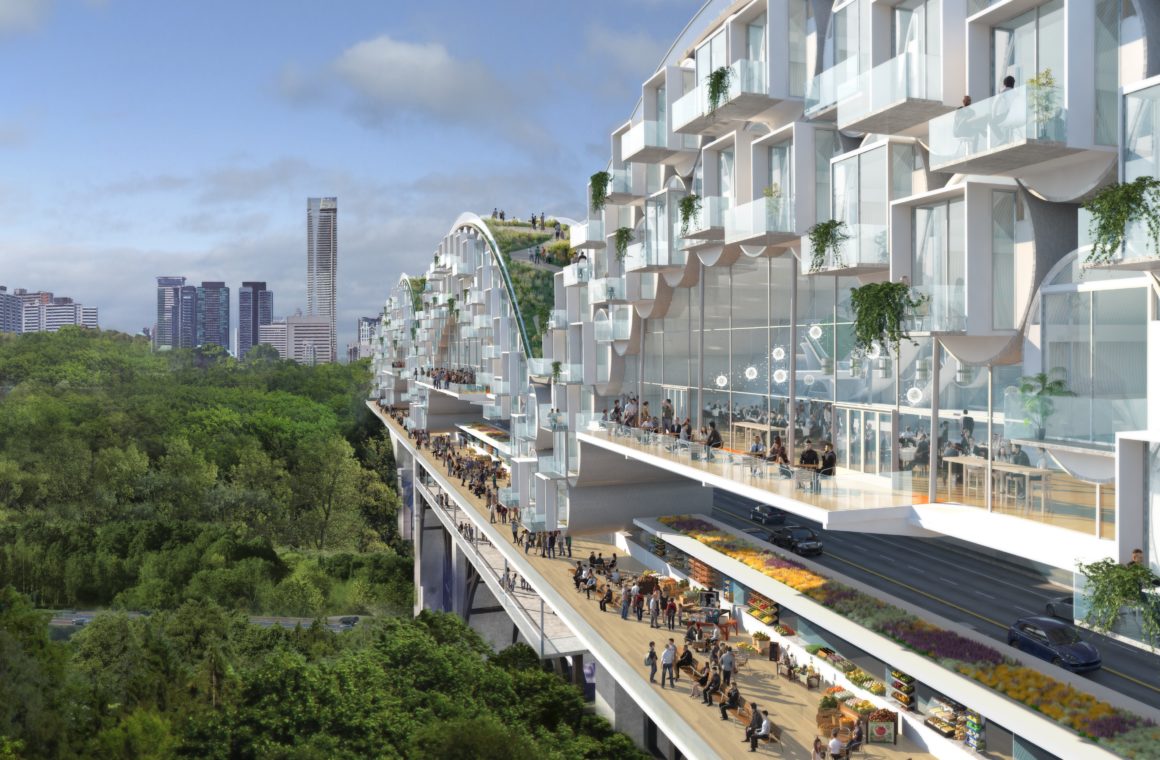 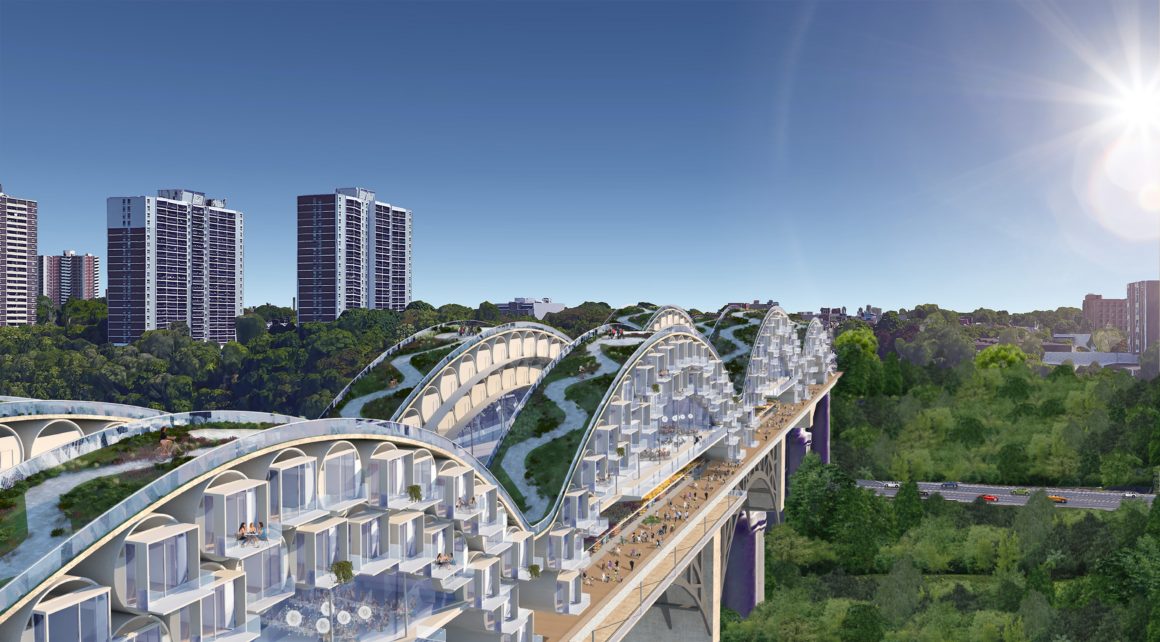 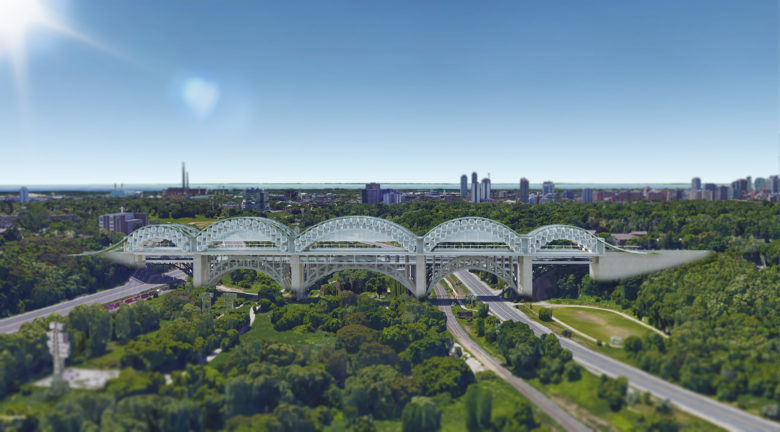 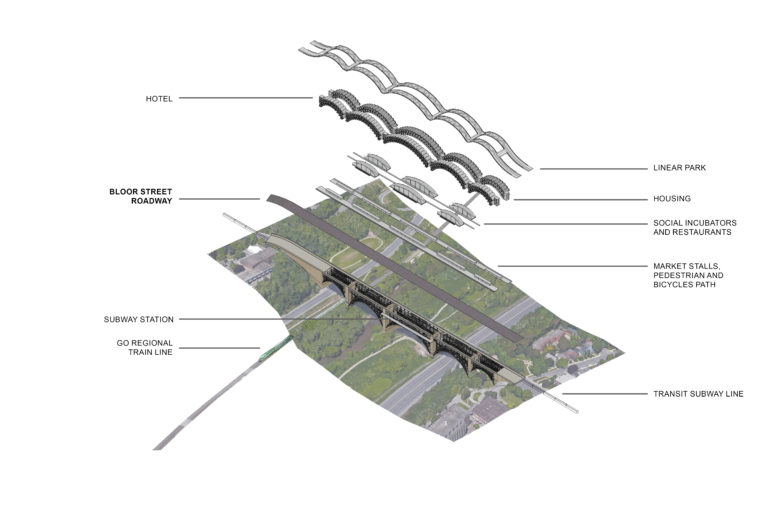 The Living Bridges project, conceived by architect Tye Farrow reimagines the Bloor Viaduct in Toronto, transforming it from a single-purpose conduit for cars to a multi-use structure that takes advantage of its proximity to the ravine below. The project aims to not only mitigate the operational, maintenance, and safety challenges of multi-lane bridges, but aspires to have a “salutegenic” presence, effectively creating healthful opportunities by introducing healthy interactions with the bridge itself.

Inspired by multi-use pedestrian bridges like the Ponte Vecchio in Florence, Farrow’s project combines the existing Bloor Street roadway with new market stalls, pedestrian and bike paths, restaurants, housing units, a hotel, and a linear park. Like its European influences the bridge increases the variety of uses in order to support additional revenue for future maintenance.

Typically infrastructure is a means to an end. Nothing more than a conduit connecting people with the things they need to lead successful lives. With Living Bridges those essential connections would occur upon the structure itself. Marketplaces and links to two transit systems support social connection, while turning the bridge into a destination brings locals into closer proximity with both the park above and the ravine below. The additional features increase use and possibilities for social impact.

Tye Farrow, FRAIC, B.Arch., M.Arch.U.D., LEED AP, OAA, MAIBC, MNSAA, NAA, is Senior partner of Farrow Partners. In his practice, he has gained global recognition in both the architectural and medical fields. The Stockholm-based World Congress on Design and Health identified him as a global leader who is making “a significant contribution to health and humanity through the medium of architecture and design.”

His practice is based on a philosophy of “Cause Health.” Intending to not mitigate harm, but actually introduce elements beneficial to health through design and the built environment. “Enriched environments”, as he puts it, “are similar to enriched foods that are disproportionately packed with remarkable minerals and vitamins, that super charge our mind and body, that help up our game, versus environments that are the equivalent to fast food and empty calories. There is no such thing as neutral space; what we create either Causes Health or limits our ability to thrive socially.”

Living Bridges acknowledges an important reality for cities going forward. While mental health is an increasingly pressing concern, so are housing, transportation, economic opportunity, and of course maintenance of existing infrastructure. Improving urban health will need to run alongside other pressing concerns. Design could serve as a tool to synthesize several uses within one structure, serving several important goals in the process. For state and municipal budgets straining to meet existing commitments, the attractiveness of such a possibility is clear. However, the lessons of adaptive-reuse from Atlanta’s BeltLine of the High Line in Manhattan, which Living Bridges bears not a slight resemblance, suggest that designing multiple uses does not always translate into realized gains for multiple communities. Supporting greater connection to nature for all means resisting the forces that would turn the project into an exclusive alcove of wealth and privilege.