A conversation with Before It's Too Late founder Linda Cheung. By Anja Laubscher 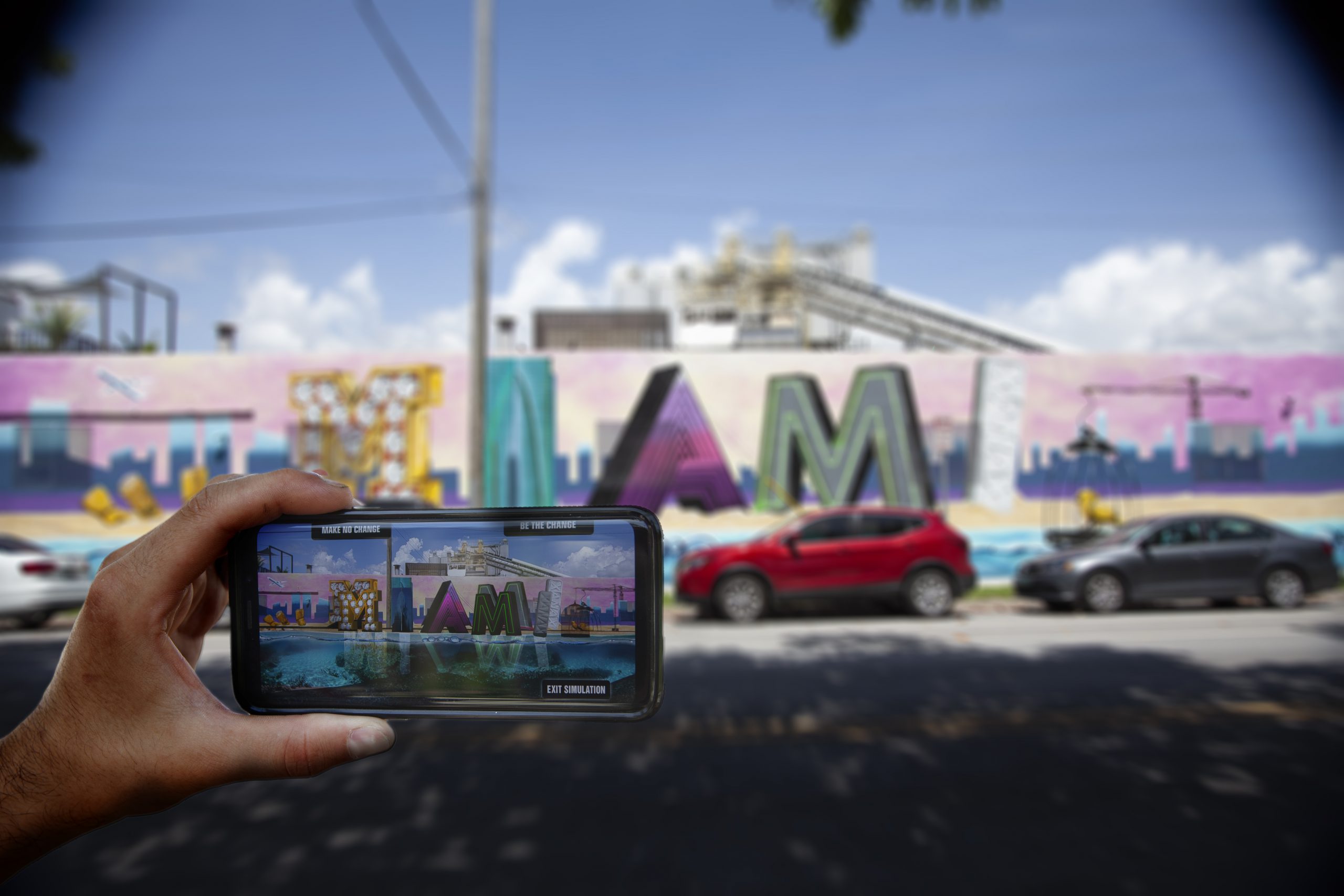 The latest season of Van Alen Sessions, “Turning the Tide in Miami,” sheds light on climate change in South Florida and profiles how Miamians—real estate developers, artists, architects, ecologists, activists—are fighting the effects of sea level rise. In investigating the future of Miami and questioning the sustainability of its real estate economy, infrastructure, and drinking water supply, it became evident that radical intervention is necessary to effectively prepare for sea-level rise.

Before It’s Too Late (BITL), a non-profit prototyping lab using arts and technology, is at the forefront of climate change education for the public. BITL couples scientific climate research with art and technology, and experiments with social theory in an effort to spark changes in behavior. Currently, Miami Murals—depictions of present-day Miami overlayed with augmented reality simulating Miami’s future—is BITL’s flagship program. Miami Murals’ pilot mural launched in the Wynwood neighborhood in February, and the lab is currently designing their second mural at EcoTech Visions, a Miami-based green tech incubator hub.

Despite being less than a year old, BITL is enthusiastically exploring various avenues to transform their pilot mural into a movement. Earlier this year, they worked with the City of Miami to propose an expansion of the program into twelve more communities through the Bloomberg Public Arts Challenge. The plan proposes the creation of several murals across Miami-Dade County as a means to combat climate gentrification and unite segregated communities in a common cause. BITL is also working on a high-impact proposal to cover Miami Beach in its murals and create the first augmented reality art walk.

We spoke with BITL Founder Linda Cheung about the Miami Murals campaign to understand how creative thinkers can engage with issues surrounding climate adaptation and to explore the power of using one’s own voice to ignite a cultural movement.

Anja Laubscher: What sparked the inspiration to create the Miami Murals campaign and this unique way to create awareness about sea level rise?

Linda Cheung: I was working on climate change, approaching it from a business, policy, and science perspective, constantly aiming to align incentives to get the system to work for us, and observed that it was not working fast enough. I realized that there was a lack of inspiration, and that the only way to get under 2 degrees Celsius by 2100 was through a total radical systems change, which is not possible with an incremental way of thinking in business and policy.* So I researched radical cultural changes in the past that totally shifted our mental and ethics model for society. This idea of being a catalyst for cultural change inspired me to think about climate sustainability, and ask “what are the best tools to captivate and build a bridge to the public?”

*The below 2°C threshold refers to the benchmark and worldwide goal to maintain a global average temperature below 2°C above pre-industrial temperature levels.

AL: It is clear from the BITL website that you believe this bridge sits at the intersection of art, technology, and science. Why these three?

LC: The science piece is obvious—climate science. A lot of what we do is also based on behavioral science, systems, and social change. We study the history of social revolutions to see what it takes to enact a cultural tipping point and what we can learn from that. We then use arts and technology as the tools to spark that change. Art is a cultural vehicle to reach out to people in new and emotionally engaging ways, and for a subject like climate change—which for a lot of people feels very abstract and far away—I feel like we need that. Technology, projection mapping, virtual, and augmented reality is like art—it attracts people to a message in a new flashy way. It is also a means to bring people together on one platform. I created the Miami Murals to connect different people through the same public mural campaign, to show that we can work together as individuals to contribute to the same goal. By merging technology and art, we can visualize something as abstract as climate change, take people into the future, show other possibilities, and build empathy for another species or people group.

AL: How does the art and technology combination technically work?

LC: The future plan is to develop a mobile app that displays a map of the locations of the mural sites, like a public art tour. People will then physically visit the sites and see the murals in their physical form. They will then open the app and use their phone’s camera to scan the mural or use geolocation to trigger the location. The phone will recognize the image and display a 3D animation augmented reality of a sea-level rise-affected future.

AL: What is the message behind the Miami Murals?

LC: There are two main messages. The first one is to wake up and start realizing that we have this big climate problem and we are running out of time to solve it. The second message is “it starts with us.” We need to stop pointing fingers and realize we are all part of the problem and the only way to solve it, is if we all dawn a new attitude of “I am going to do my part.” In the process, we will become more educated about climate change and how it impacts us as a society.

AL: What was the concept behind the pilot mural?

LC: I merged my knowledge of climate change, science, and what I thought was important to communicate with my strategic and aesthetic vision. The environment has many aspects to it. You can talk about energy or consumption, but instead, I just wanted to talk about the most fundamental thing of all: awareness and introspection. We called it the “climate awakening;” awakening our perspectives to realize that there is this problem in our city that we have been ignoring and we are all part of the problem. So the pilot mural design is a reflection of Miami, its facade of itself, and how it wants to appear to the world—a flashy, materialistic party. The augmented reality represents sea-level rise looming and threatening all of it.

AL: BITL seems to take a much more emotional approach to raise awareness around sea-level rise, calling citizens of Miami to passionately fight for the soul of the city. Why this more personal and emotional approach?

LC: Because humans, no matter how smart and capable they are, make decisions from an emotional place. For instance, shaming is ineffective, but galvanizing hope is very effective. So if you want to have an impact you have to get to those emotions driving decisions and people.

AL: Why is it crucial for designers, artists, architects, and technologists to use their profession and mediums of design, art, and technology to actively contribute to the conversation around climate change?

LC: Creative people know how to translate a message in new ways to the public and their innovative thinking is exactly what we need to address and solve the larger climate problem. I am trying to get the creators and the innovators of our world on board, so that they are educated on the issue, think differently about how they can become sustainable designers through their own work, and become the new brand ambassadors of this message. And hopefully, as a result of their not-too-scientific but optimistic response, inspire others and become role models for society. I am trying to prevent society from getting caught up in the nitty gritty details and the complexities—because it is a very complex issue—but rather to just get creative, roll up our sleeves, and start creating.

AL: Practically, how can other creatives, technologists, and the general public get involved in a project like Miami Murals?

LC: I am creating a platform that I hope can be a movement, a platform where one mobile app and website show a map of the original murals that we launched, and then all the other satellite murals made by others contributing to this campaign. I want the movement to grow, and not be limited by my own time and resources. It doesn’t even have to be in Miami—it can be anywhere. But whether people are specifically contributing to the Miami Murals movement or generally rethinking design processes and materials used, all of our professions could be playing a role in changing the trajectory of climate change. I just want to encourage everyone to realize their own voice. I really believe in the power of the individual now—I am just one individual actor, and I started this lab and campaign. If we all believe in our own power as an individual, just imagine the magnitude of our impact if we work together.

Van Alen Sessions takes viewers on revealing trips through a city’s internal workings, documenting conversations with urban planning practitioners and city dwellers. The series brings together the analysis of experts and the experiences of ordinary people. Van Alen Sessions is supported in part by an award from the National Endowment for the Arts.