How can we recreate an urban core so its design is intelligent, flexible, and responsive to the needs of residents and visitors?

For Van Alen Report 20, we invited designers from around the world to share projects at the vanguard of using science-informed practices to design healthier cities. For each featured project, we asked the designers to identify the health impacts intended, and discuss how insights from neuroscience or psychology influenced the project’s design. We also consider how each project might advance both the conversation about evidence-based design, and the greater pursuit of designing healthier cities for all. These profiles have been adapted from the designers’ responses. 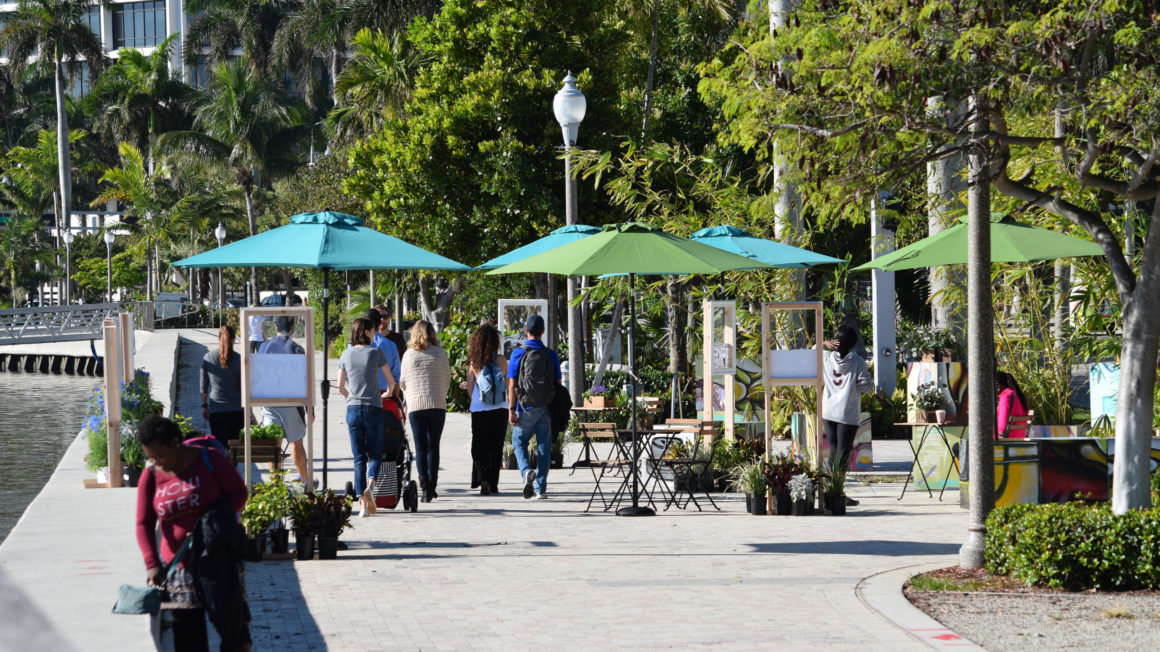 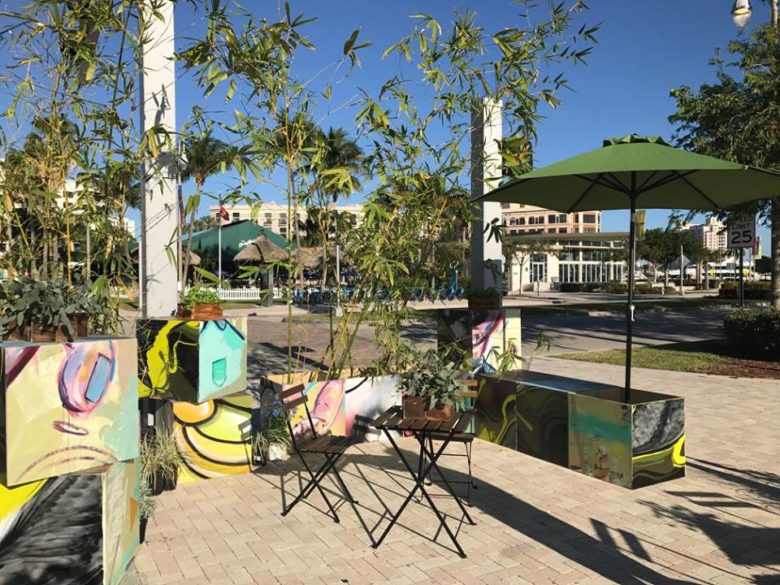 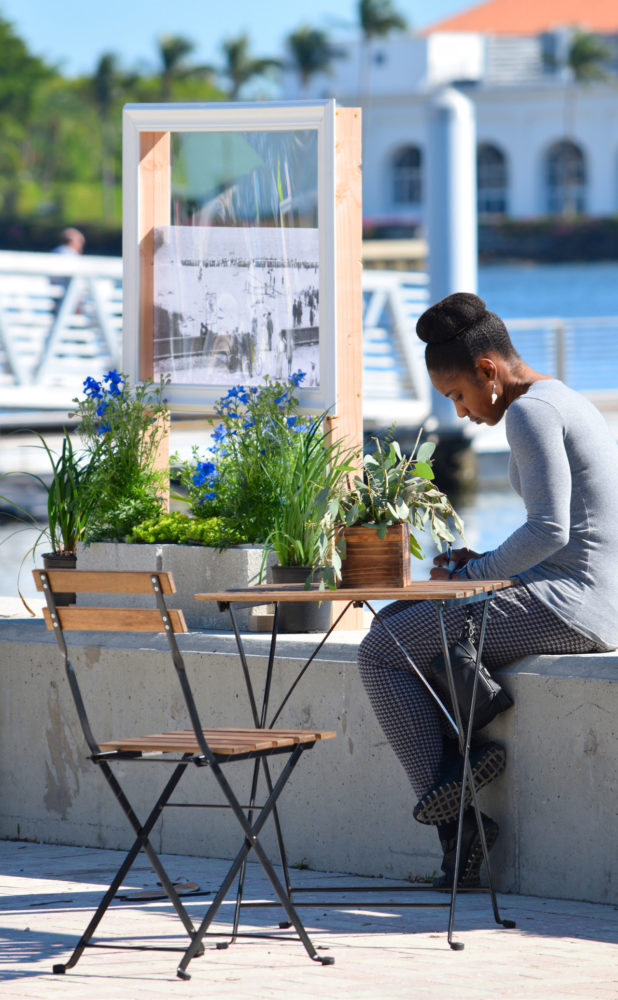 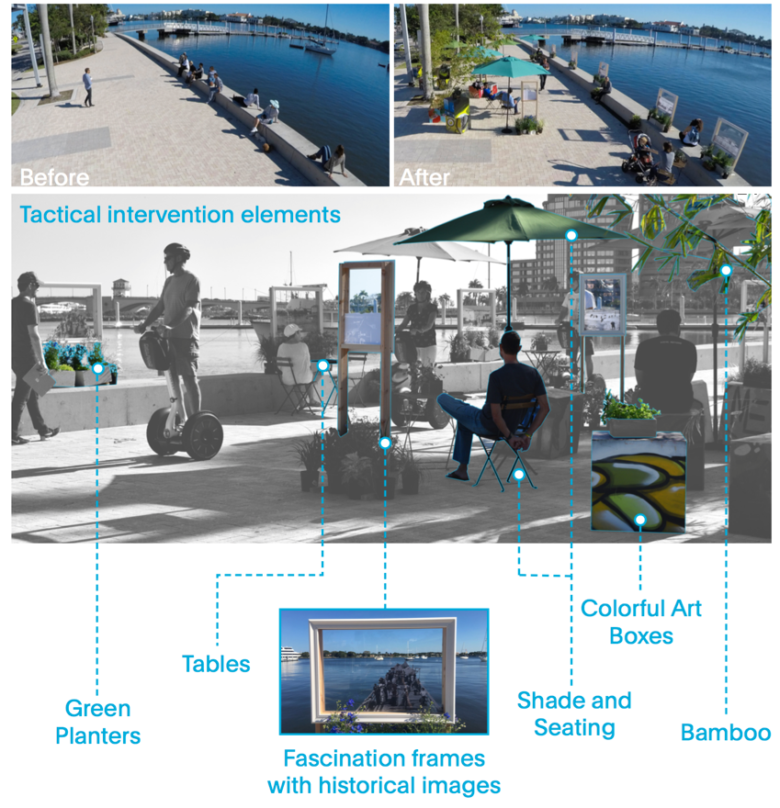 This intervention was a response to challenges set out by Shore to Core, a design and research competition launched by Van Alen Institute, along with the City of West Palm Beach and its Community Redevelopment Agency. Shore to Core asked: How can we recreate an urban core so its design is intelligent, flexible, and responsive to the needs of residents and visitors? The winning research team tested the power of a design intervention on a waterfront location to alter people’s emotions, physiology and behavior.

Happier by Design’s study site, West Palm Beach’s waterfront promenade, offered a unique challenge: The city had made significant investments in an attractive park and promenade, in order to make the waterfront a magnet that draws people to and through the core of the city. It could be a public amenity that brings people together in ways that provoke joy and civic spirit. Yet it wasn’t meeting its potential: pedestrian flows on the waterfront promenade on weekdays are only a fifth of those on Clematis Street just a block east.

Grounding their plans in rigorous environmental psychology research, all elements were designed specifically to boost those feelings which, grouped together, were termed “restorative fascination.” The intervention used art, fragrant flora and visual references to local and natural history to enliven a short section of the waterfront promenade. To this the team added movable chairs, tables, and umbrellas for comfort. After, volunteers were led on tours of the site, during which we recorded their emotional and physical states. The team also studied the behavior of pedestrians not involved in guided tours.

For direction, Happier by Design turned to what environmental psychologists call restorative environment theory. A key component of natural environments that encourages restoration is the presence of fascinating stimuli (Kaplan & Kaplan, 1989). “Fascinating,” in this context, means something that attracts involuntary attention, but requires no effort. In a nutshell, these stimuli, be they in nature or designed, occupy one’s brain without adding to the cognitive workload, and can make people feel calmer and happier.

The tactical intervention had a statistically significant and positive effect on perceived stress, perceived social trust, perceptions of place belonging and quality perceptions of place, as compared to the control. Trends in other dimensions of mood were in a positive direction. The promenade’s new features promoted aspects of psychological restoration, while achieving West Palm Beach’s goal of encouraging more human engagement on the waterfront.

Happier by Design, the winning research project of our Shore to Core competition, Happier by Design, was a collaborative team comprised of Happy City, the University of Virginia, Street Plans Collaborative and UK-based Space Syntax. The team set an inspiring example of cross-discipline work that integrates mental health research and stakeholder needs into every step of the design process.

Happier by Design’s experiment strengthens previous research on environmental psychology and biophilic design, supporting the idea that water can support mental health and wellbeing. Design can enhance this feature of the city or turn people away from it. This project showed that by choosing the first option, cities can improve a sense of well-being and decrease stress levels – an increasing necessity in crowded urban life. As waterfront infrastructure is added or adapted in the face of changing climate, cities have an opportunity to create more engaging spaces that support health at an individual, community, and environmental scale.