Founder, Urban Planning and Design for the American City 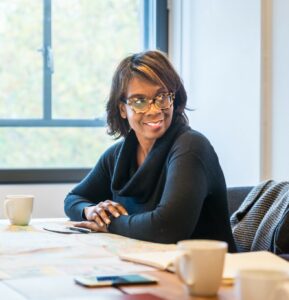 Toni L. Griffin is the founder of urbanAC, based in New York, specializing in leading complex, trans-disciplinary planning and urban design projects for multi-sector clients in cities with long histories of spatial and social injustice. Recent and current clients include the cities of St. Louis, Chicago, Detroit, Memphis, Milwaukee, Pittsburgh, St. Louis and Philadelphia.

Toni is also Professor in Practice of Urban Planning at the Harvard Graduate School of Design, and leads The Just City Lab, a research platform for developing values-based planning methodologies and tools, including the Just City Index and a framework of indicators and metrics for evaluating public life and urban justice in public plazas.

Ms. Griffin was a Professor of Architecture and Director of the J. Max Bond Center on Design for the Just City at the Spitzer School of Architecture at the City College of New York.  Toni has also held several public sector positions including, Director of Community Development for Newark, New Jersey; Vice President and Director of Design for the Anacostia Waterfront Corporation in Washington, DC; and Deputy Director for Revitalization and Neighborhood Planning for the DC Office of Planning.  She began her career as an architect with Skidmore, Owings & Merrill LLP in Chicago, where she became an Associate Partner.

Ms. Griffin received a Bachelor of Architecture from the University of Notre Dame and a Loeb Fellowship from the Harvard University Graduate School of Design.  In 2014, Toni was the Visiting Associate Professor and Theodore B. and Doris Shoong Lee Chair in Real Estate Law and Urban Planning, in the Department of City and Regional Planning at University of California, Berkeley.

Toni has lectured extensively in the United States, Europe and South America and has published several articles on design, urban justice, legacy cities and Detroit.  In 2016, President Barack Obama appointed Toni to the US Commission on Fine Arts.