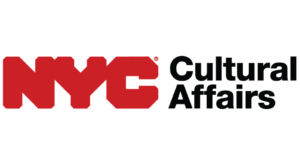 The New York City Department of Cultural Affairs (DCLA) is dedicated to supporting and strengthening New York City’s vibrant cultural life. Among our primary missions is to ensure adequate public funding for non-profit cultural organizations, both large and small, throughout the five boroughs.

DCLA also works to promote and advocate for quality arts programming and to articulate the contribution made by the cultural community to the City’s economic vitality. The Department represents and serves non-profit cultural organizations involved in the visual, literary and performing arts; public-oriented science and humanities institutions including zoos, botanical gardens and historic and preservation societies; and creative artists at all skill levels who live and work within the City’s five boroughs.

Through its Materials for the Arts Program, DCLA provides free supplies for use in arts programs offered by non-profit groups and New York City public schools. DCLA has also changed the physical landscape of New York City through its Percent for Art program by commissioning more than 180 works of art by some of the world’s leading artists at public building sites throughout the city.