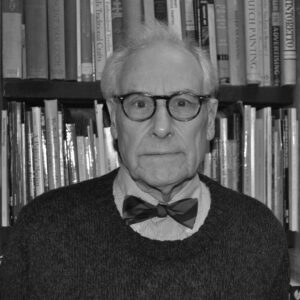 Byron Bell is a Registered Architect in the States of Connecticut, New Jersey, and New York as well as a Registered Planner in the State of New Jersey. He received his B.A. from Princeton University in 1957 and his M. Arch. from Columbia University in 1962. Mr. Bell has been a partner in Byron Bell Architects & Planners since 2012 following serving as partner and principal in a number of predecessor firms. His works include projects for Columbia University, The Century Association, Council on Foreign Relations, American Museum of Natural History, The Grolier Club and Manhattan School of Music. He has served on the NIAE and Van Alen Boards for 32 years, and is currently an emeritus trustee. Mr. Bell was named First Alternate for the Paris Prize in Architecture in 1962, received the William Kinne Fellows Memorial Fellowship in 1963, and was elected both as an AIA Fellow and to the National Academy of Design in 1995.