Archive
To The Streets  

To the Streets is a fast-paced one-day design competition that asks multidisciplinary teams how a distributed network of assembly spaces could be designed for the streets of New York City’s five boroughs.

To the Streets was a fast-paced one-day design competition that asks multidisciplinary teams how a distributed network of assembly spaces could be designed for the streets of New York City’s five boroughs. Participants proposed how design can make activism more inclusive and champion the city’s diverse population. 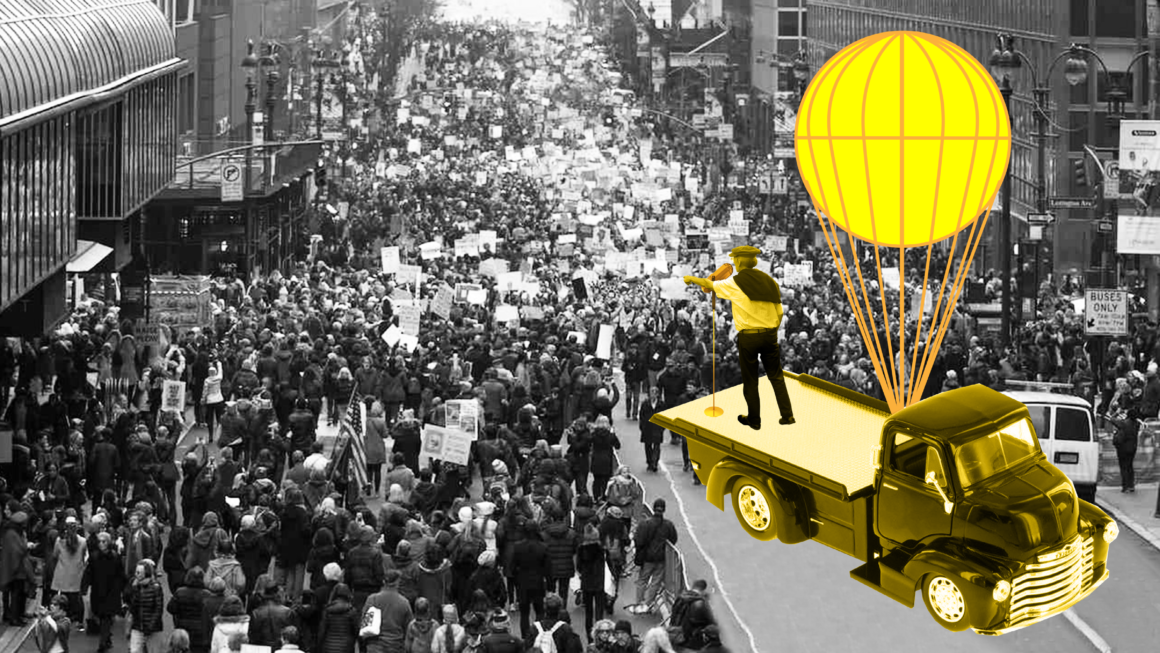 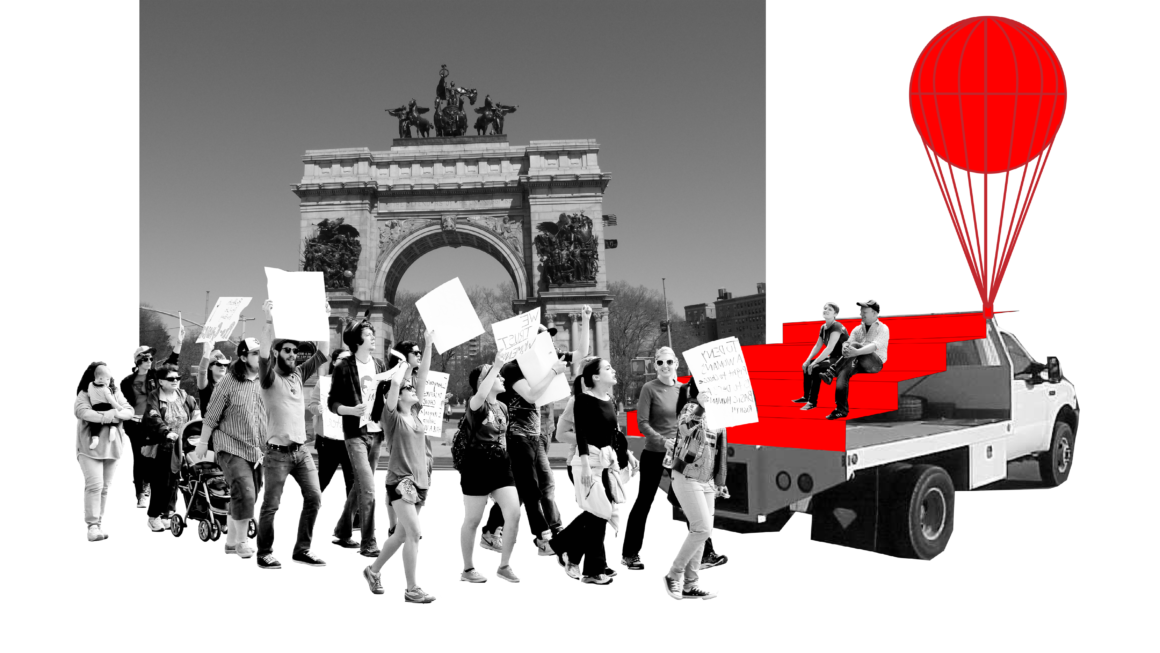 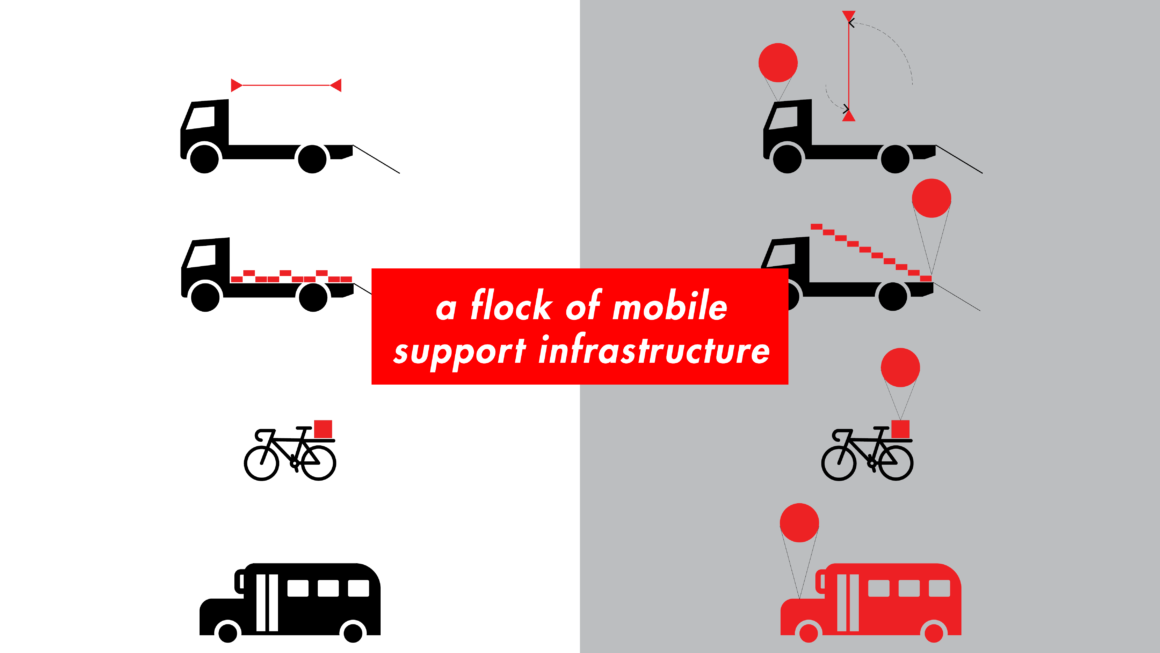 Infrastructures of the Not Normal

Protests draw power from the places where they occur, whether in front of a government institution or within the heart of a community. To help people amplify their presence and their voices, we propose a mobile and distributed infrastructure that stands apart from everyday life and goes to the places where people feel their voices need to be heard. This mobile “flock” supports protest and free speech by harnessing and augmenting familiar technologies like social media that are crucial for assembling networked collectives spread across the city and mobilizing people for action. Bridging digital and physical realms, a series of hovering, interactive place markers share and disseminate moments and messages from events throughout the city. 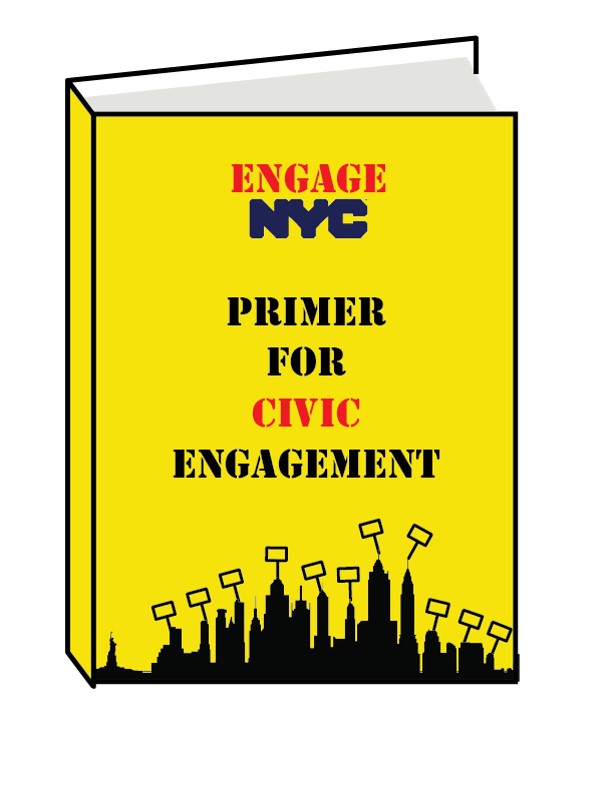 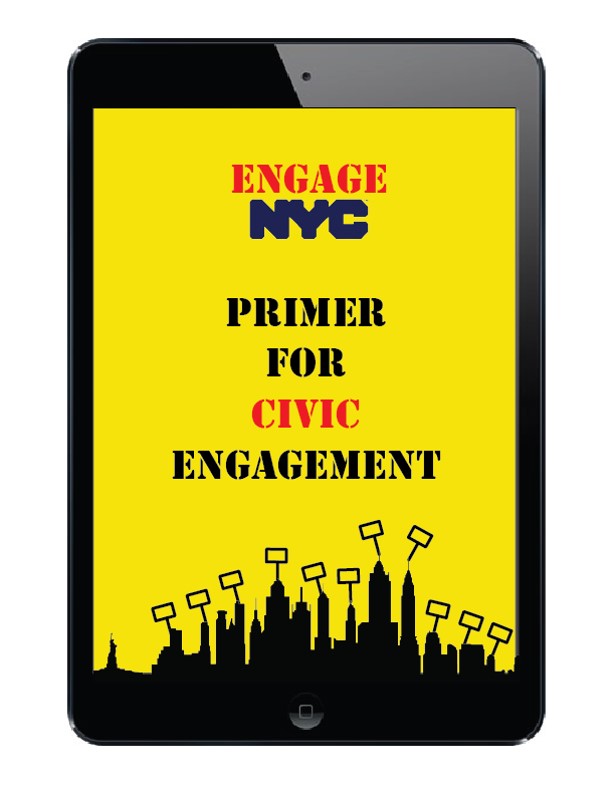 The Primer for Civic Engagement is a manual that details a wide range of methods for enabling assembly in public space, and offering communities a set of tools to spark political interactions. It outlines a set of simple yet bold modular designs, spatial strategies, and communication tactics to enable shared civic actions. The Primer emerges from New York’s urban conditions: gridded streets, dispersed public spaces, diverse communities, and complex transit networks. The manual identifies street corners, public squares, and intersections (typically near transit) that become a field of distributed public spaces that can serve as nodes for protest. To spark political engagement, community-built elements will help create speaking platforms, conversation circles, and performance stages for discourse, action, and exchange. When shared across media platforms, images of repeated elements serve as signifiers creating a unified sense of resistance. Born in New York, the Primer can be adapted to link movements across the country. 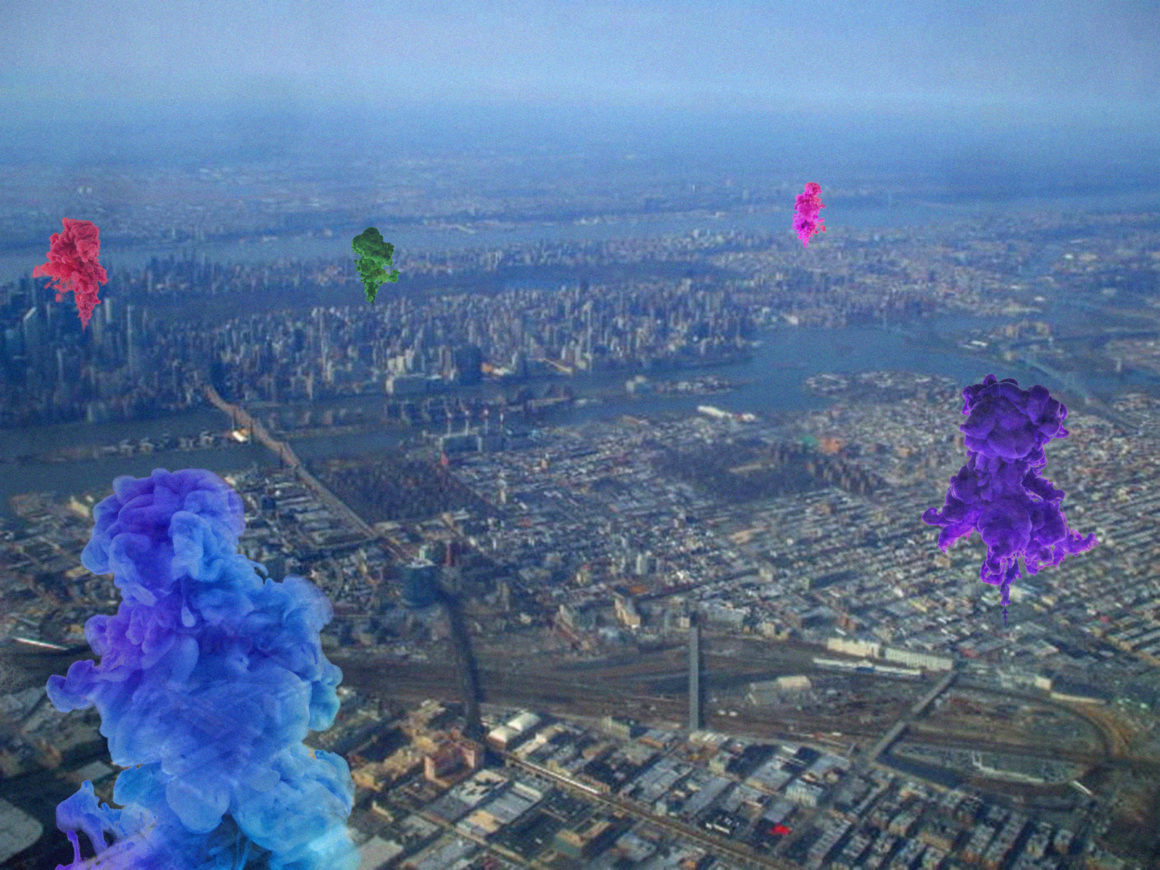 How can local actions resonate on a civic scale? How can a broad-based consensus be achieved by celebrating diversity? We propose three interventions that combine to create an adaptable institution for public protest. 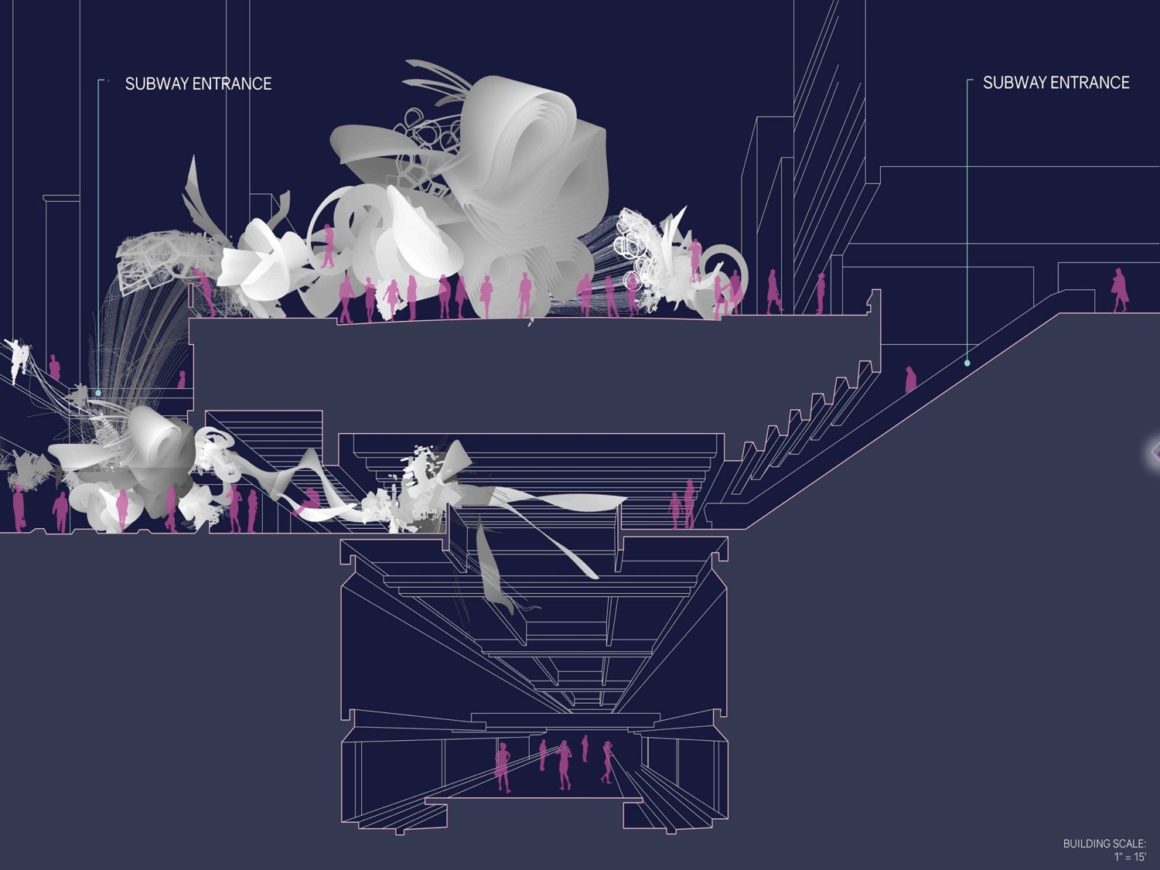 REMEDIUM looks at the role of the architect in contemporary protest movements, and whether they can   create spaces that respond to real-time changes in programmatic demand. Protest events are now instigated largely through social media, and architects must harness tools to help provide spaces that promote such gatherings. We propose a Protest Pod, an expandable form influenced by advanced origami folding techniques to ensure compactness in its mute state. Electrically charged fabric along with jointed hard members will serve as a signaling system, expanding to form partial shelters that can be appropriated and adapt to the dynamics of street or subway occupations. Artificial intelligence has the potential to provide a crowd-sourced interface that promotes art and civic engagement. Robotic components work collaboratively to expand and contract while displaying the latest social media posts for an event directly onto its surfaces. This synthesis of both sculptural and digital realms through developing technologies allows participants to reconsider the role of public space and protests as an expression of identity within New York City. These responsive forms of signage will remain dependent on physical interactions of individuals in order to refrain from advertising and corporate interventions. 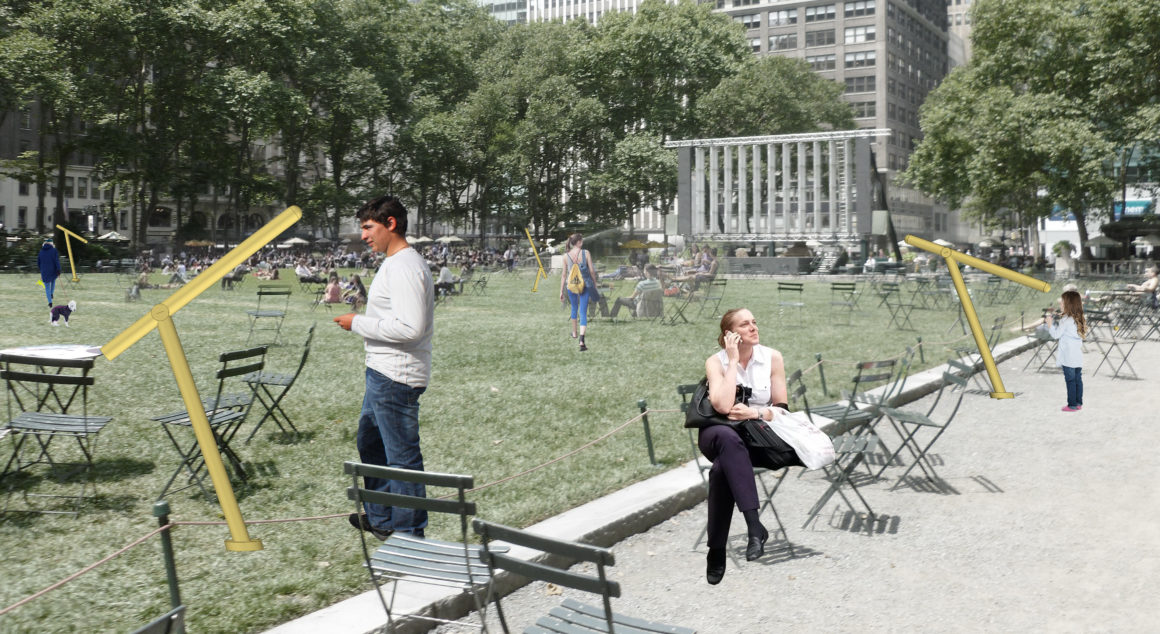 In today’s information age, Americans use digital media to exercise our right to free speech. However, these networked platforms curate tailored truths, and many believe that they help to polarize opinion and society as a whole. Respecting the value of every individual’s voice, and curious about the motivational drive that has inspired New York residents to speak out, we designed urban nodes to support storytelling that connects different locations and people of different background. Iconic by design, we envision a tool that inspires democratic urban discourse. Its user-friendly interface would welcome locals to tune into an assembly live or respond to city administered prompts. A data-driven approach to activating the nodes will ensure that they are strategically programmed and located to maximize benefit for the New Yorkers on the streets and the city that wants their voices heard. 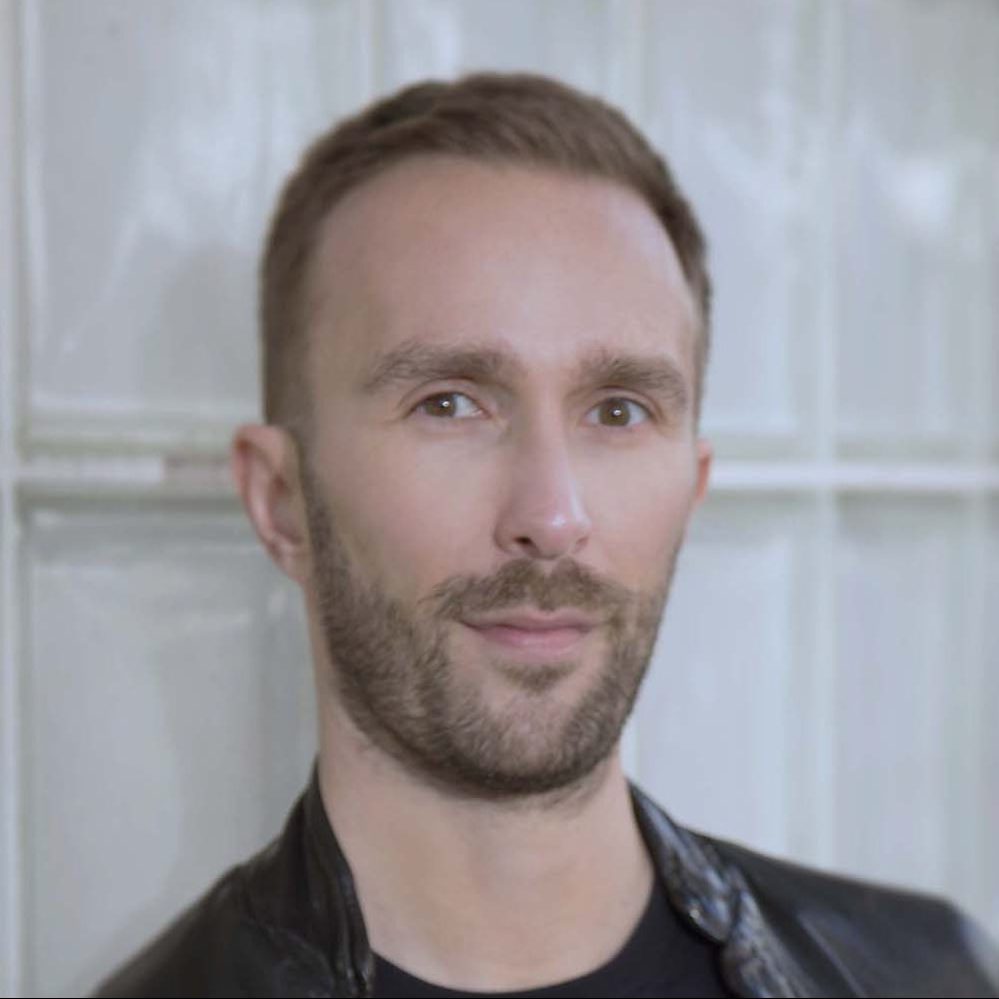 The Horticultural Society of New York